Miami Dolphins Are No Longer Interested In Kevin Kolb 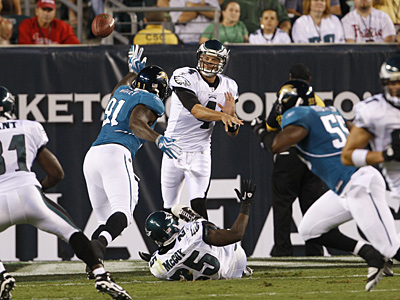 The Miami Herald says the Miami Dolphins are out of the Kevin Kolb chase. Barry Jackson of the paper says his sources inside the Dolphins organization tell him that the team isn’t willing to part with a number one pick for Kolb, once the NFL gives the okay for trades and free agent signings.

He says the Dolphins don’t believe they have seen enough of Kolb to warrant relinquishing a first round pick. They point their fingers at his body of work and the fact that he’s thrown more interceptions than he’s thrown touchdowns

That means the Arizona Cardinals continue to be the favorites with the Seattle Seahawks in second place.

How Good Are The Eagles’ Quintin Mikell And Trent Cole?

Should Taxpayers Fork Over $500 Million For New Vikings Stadium?

Body of work? The NFL drafted 4 QBs in round 1 with ZERO body of work. It has been reported that Kolb would have been the 2nd ranked QB if he had come out this year.He is ready to play NOW! When protected, he was the NFL player of the week – twice! This is why the same teams are bad – year after year!

dammit! Can we please get this lockout out over and done with? Can the fans sue the NFL for irreparable harm?

Everyday that passes, people wake up a little more to Kolb and his resume. We gotta move this guy for something good

You can scratch off Seattle also,
My Sources out in Starbucks land have told me that Matt Hasselback is coming back on a 2 year deal and that agreement has already been reached but that they can’t announce anything until after the lockout is lifted and the NFL Calender is back in place which is why Seattle didn’t draft a QB
Right now, I would say 80%-20% that Kolb remains an Eagle for 2011 Season for better or for worse for I believe that Free-Agent Marc Bulger is probably already a done deal for the Cardinals but again no annoucements can be made at this time..

SHHHHH SHHHHH – Miami, Dont tell nobody..so there is a team actually out there who has some sense?…Eagles obviously didnt have any going into 2010, basing Kolbs performance on a handful of starts….
All I have to say, is someone please tell Miami to shut the hell up…they are ruining it!

Runtheball09…if your gonna bash Paul at least come up with something other then stf up. Show some class son.

Teams are just coming up with reasons why there not willing to trade a pick. Its all b.s.. if there was FA and trades allowed to be made then the phins would take him over the bums on there roster for whatever we ask. Same with Cards,Hags,Vikes,and insert name.

I would just hang on too him now. If we couldnt get a pcik for him in thedraft this year and we’re not gonna be able to get a stunner on d this year for him then i say ,no way.

This could be a a smokescreen from Miami, and it won’t influence any other teams at all… c’mon guys…

indeed Shill…..Phins have one of the worst qb situations in football.Believe the media about teams stances and you learn nothing.

The longer this thing drags out the more time Teams are putting a magnified glass on Kolb..They are starting to see what we see…

They would have gotten a 1st rounder and change…See how they waited for Moss to have a great game than shipped him?

That’s the difference between a “Golden Standard” and the Eagles..

By the way Guys….Lurie have been voted #5 in the top 10 owners over Jerry Jones who have 3 Superbowls under his belt.

Plus, they had Parcells in their FO very recently, we all know he’d be shrewd enough to pull a smokescreen…

songs, you should try this new thing, it’s called ‘jumping to conclusions’ -look into it… I think it might be up your alley

you guys all get your panties in a bunch. if we dont trade kolb is it the end of the world? chill out.

for erock: paulman your grandma watching tv in seattle doesnt constitute a source.

full disclosing. i stole this from another blogger. but he’s right.

When it comes to making decisions on QBs I trust the Dolphins. Check out these winners:

And the decision to pass on Drew Brees was genius…….pure genius.

Kolb is awful, eagles never were getting a first rounder for him and I sincerely feel bad for all the folks here who believed the eagles PR machine that spreads propaganda thinking they would have got a 1st for him.

Most GMs would rather take an unproven QB in the 1st round and try to build around that guy then take a 28 year old back up QB that hasn’t proved in 4 years that he should be anything more than a back up.

I wish and hope I am wrong and thinking there is one idiot gm out there to give us a 1st or a player but it is highly unlikely and almost impossible now that the draft has passed.

Think about it, say the Cards give up a 1st to us and get him and he has a great year (extremely unlikely) now they gotta pay him a ton of money after this year or get into a bidding war, its not worth it to any GM – ie taking an unproven guy and giving up a lot for him and to only have him locked up for 1 year. Not much of a reward. Kolb will be an eagle this year and the excuses after the year will be focused on the lock out.

WAKE UP it aint happening and never was.

LOL I hear what you’re saying with that list @runtheball

but also, we could take it in another direction….is it that Miami seen more from the guys on your list and were willing to take chances with them? and they rather not take the risk on Kolb? after all you are taking about a franchise who has had some dissapointment at the QB position and should be the first in line to try and get a solid QB…

Songs, I agree with you…I had a problem with the Eagles not allowing Vick to compete for the starting job during training camp/preseason…They acknowledge Kolb as the QB of the future after him only starting a handful of starts….
The reason why the Dolphins say they dont want Kolb is the exact reason why I didnt want Kolb to begin with….and would have rather kept McNabb…Because we have not seen enough of this man to annoint him the next best thing since slice bread…

My inside source (Beer guy at the Phils Marlins game) tells me that Dolphins would have traded us a first if we gave them back the second they gave us for Feeley. Coach Sparano stated “There’s no way those damn Philadelphians are pulling that shit on us again till we get paid back for the first deal. Kevin Kolb a Dolphin? Fuhgeddaboutit.”

IF Seattle can’t get Kolb, then I’m sure hasselback is good fall back plan – but come on PAULMAN, you can build on a 27 year old QB who, when given protection, has several 300 yard games and was selected NFC player of the week. There is no future in an over an often injured 35 year old “back-up” QB.

Seattle and Arizonaa already have agreed to tank it in 2011 with the lockout/lost OTA/Miminum SUmmer camp and are really planning on teh 2012 Draft to get QB Andre Luck.. These teams will focus in 2011 in strengthen the OL/DL and running games.. and go for braoke to draft the best QB to come out of College in years ..

Ya Right! Tank a season. Brilliant! Can’t understand why you aren’t working in a front office.

schiller
May 11, 2011 – 5:03 pm
Plus, they had Parcells in their FO very recently, we all know he’d be shrewd enough to pull a smokescreen…
You mean like when he reluctantly gave up future HOF Booker

My physic tells me Minnesota is still a viable option. Arizona is going to offer Dockett and a 2nd rounder along with Kurt Warners wife.