Super Bowl Champ GM: Kevin Kolb Is Worth More Than 1st Round Pick 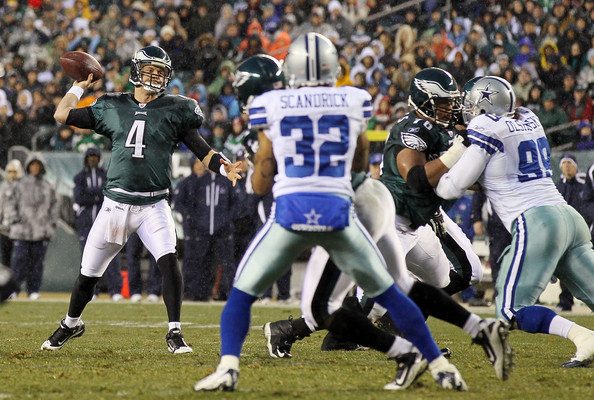 Despite the fact that nearly all of the NFL teams that were eager to make a deal with the Eagles for Kevin Kolb, have made a move or two to solve their quarterbacks needs, former Super Bowl Champion Washington Redskins GM Charley Casserly, thinks the Eagles should ask for more than a first rounder for Kolb.

Casserly who is a regular on NFL Network said that the Birds should demand more than a first rounder now because they won’t get any help from the pick until next year and therefore the trade won’t help them until 2012.

The former GM says Eagles still have the upper hand over the teams that don’t have a starting quarterback because, “If you don’t have (a quarterback), you can’t play”.

I don’t agree with him because the Birds might only be talking to the Arizona Cardinals. Before they had a huge advantage because there were numerous teams who were willing to bid against each other for Kolb’s services. There’s no way the Eagles are in as strong of a position now as compared to when there were eight to twelve teams calling the Nova Care Complex because they didn’t have a starting quarterback and were interested in obtaining Kolb.

PhiladelphiaEagles.com does point out the fact that in the last few years a couple of teams have been willing to give up more than a first rounder for a starting quarterback.

“The Jets traded a first-round pick, a second-round pick and three veteran players in 2009 for Mark Sanchez, who at the time had never thrown an NFL pass and had limited college experience. Baltimore dealt a first, a third and a sixth in 2008 for rookie Joe Flacco, who didn’t even finish his college career at a Division I school.”

Casserly believes the Cardinals and the Seahawks are the two teams most interested in Kolb.

“Clearly Arizona is at the top of the list, Seattle is a close second … Arizona was in the playoffs two years ago with a veteran quarterback and they have a Hall of Fame wide receiver in Larry Fitzgerald.”

LeSean McCoy Will Be At Eagles Workouts Next Week

My hope is that they trade him for a player. A starting DE or CB would be great. I really don’t understand the push for picks over players. I mean- I get it in some situations but this is not one of those situations.

The problem with this whole thing is how the birds put him up for sale. They put him on the lawn with a sign that said “must sell, 2 1st rounders or best offer”, instead of “only serious offers please”.

Stevo – I may be mistaken, but I don’t think anyone is preferring picks over players. I think the picks over players thing is the more LIKELY thing to happen, because trades involving draft picks are FAR more common in the NFL than trades that involve players for players.

And isn’t the problem with this whole thing the NFL labor situation? You seem to be putting stock in to media ‘reports’ about what the Eagles are asking or what teams might be offering. I personally don’t believe that we (the general public) know anything at all about what has been offered or asked for involving Kolb….

G:
With Kolb the Eagles cannot allow the lockout to reduce their own expectations. It just cannot happen. Kolb is arguably better than most of the QB’s taken this year in the first round. If the Eagles do not get what they think is his value (and I think that is a 1st and a 3rd or better; or a 1st and a very good player,) then they should keep him to back up Vick. During this year (if it happens,) Kolb will still generate interest, as QB’s get injured. The Eagles should not be eager here, G.

as far as i can tell- its the birds that are pushing getting a 1st rounder for him schiller. and then you hear other teams say he’s worth 2 2nd rounders and no more. And on and on we hear about draft picks. the reason for this is that a team who drafts a guy in the 2nd and turns that into a 1st rounder or more looks smart. And we know how much Andy wants to look smarter than the others. So….. the birds value picks more than players most of the time. The jason Peters trade would be the only trade that maybe goes the other way.

I know WE fans would rather something more like a player but in the NFL draft picks are like Gold.

Stevo, you REALLY think that A) Andy Reid is the sole ‘leader’ of the Kolb transaction deciosn (although he’s neither the owner, team president, or general manager) AND 2) Andy’s motivation is about his personal image and not what’s good for the team/what will give him the best chance to win and make the team better?

If you really believe that, I say that’s f-in rediculous. Any potential Kolb trade would be evaluated by Banner, Lurie, Roseman and Reid (most likely among others), so a final decision wouldn’t be largely if at ll about how smart Andy Reid looks.

Everyone must remember, the Eagles want draft picks because most proven players want to get big contracts, and the Eagles loathe big contracts. They will get a first round draft pick, trade it down for 5 5th rounders of which 3 will be special team players and 2 will be out of the league in 2 years.

everyone must remember, rasta doc is a hater. He will take a valid point, exaggerate it to the extent ridiculous extreme, and post it to spread the overblown hate