DeMaurice Smith Has The Ball And He Must Make A Play 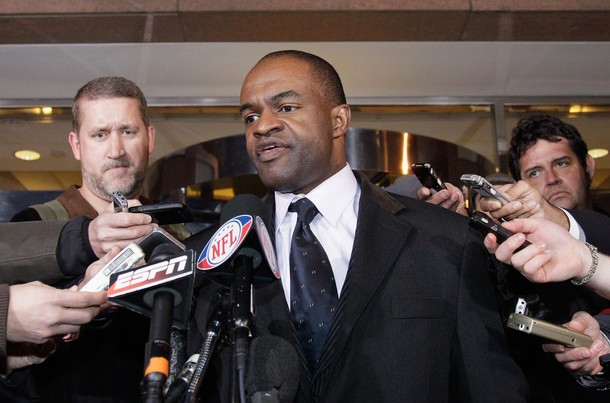 NFLPA Executive Director DeMaurice Smith convinced NFL players that he was the guy they needed to stop the league’s owners from ripping up the current collective bargaining agreement and taking money out of their pockets. He defeated the guy, former Eagles Troy Vincent, who everybody thought was the favorite to be the next NFLPA executive director.

Smith showed off his legal back ground and make an impressive presentation to convince the players that he would humble the owners and get the players a deal that was at least as good as the one they presently have. It’s time for him to put that plan to work right now.

I’m not going to say it’s fourth down, but it’s definitely third down and Smith must make a play to get a first down, so he can prevent players from starting to cave. He’s got some time, before players start missing checks but he had better have a game plan already crafted for losing the case in the 8th District Court.

I don’t there’s very much of a chance that the 8th District Court rules in the players favor on June 3rd hearing.

Some way or another, Smith is going to have to get Judge David Doty back involved or the players are going to take a bath. Judge Doty is in the process of making a decision about how much of a penalty to levy against the owners for their breaking of the CBA when they took less money from the television networks in order to get $4 billion dollars from them whether or not the 2011 season was played.

Smith and the players need Doty to reward them a good part of the $707 million that they requested in damages. They also need him to not allow the owners to use the $4 billion to operate with during the lockout.

I don’t currently see how Smith is able to lead the players to any type of success without Doty playing a major role. So I guess Smith is the quarterback for the players, but he must find a way to get the ball into the hands of the players’ number one playmaker, Judge Doty.