Thirteen Undrafted Rookies Who Could Fit The Eagles Schemes 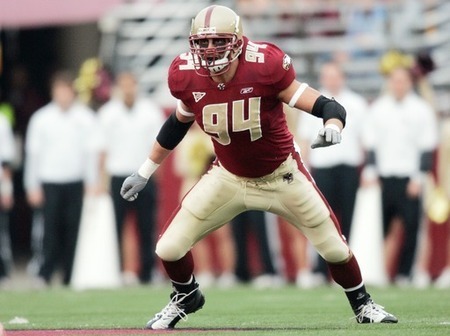 There’s one group of football players that may be affected by the NFL lockout more than anyone else. It’s the rookies who weren’t drafted.

While the labor disputes continue to threaten the 2011 season, the rookie free agents are severely stranded.

In addition to not knowing where they’ll be signed, the chance of the NFL not having time for training camp diminishes their chances to prove their worth. It’s bad enough that they’re chances of making the team they sign with are already slim.

Having said that, there is always a chance to acquire a ‘sleeper’ who fits a team very well.

The Philadelphia Eagles have signed a few guys who have given them some quality years. Quintin Mikell, Jamaal Jackson, and Antonio Dixon all were available when their respective drafts were complete.

When the free agency period finally begins, these are thirteen undrafted rookies the Eagles should pursue.

1. Mark Herzlich-LB (Boston College): The former ACC Defensive Player of The Year defeated a bout with cancer, but he hasn’t fully regained his strength. With his size (6’4”, 247lbs), if Herzlich gets completely health he’d possibly become a very good SAM linebacker.

2. Adrian Moten-LB (Maryland): With possibly 3-4 linebackers possibly departing via free agrency, the Eagles need as much

competition as possible. Moten could challenge for a spot on special teams and weakside linebacker.

3. Pat Devlin-QB (Delaware): Devlin started this offseason as one of the better QB prospects. His stock seemed to dwindle with each workout. With the right coaching staff he still has the chance to be a serviceable backup in the NFL.

5. Ricardo Lockette-WR (Fort Valley St): Lockette was recruited as a track runner and a receiver. His potential as a kickoff is

6. Zach Hurd-OG (Connecticut): Like linebackers, the Eagles can’t have enough competition on the offensive line. The former Huskies has to size (6’7”, 324 lbs) to move out to tackle if needed as well.

7. Weslye Saunders-TE (South Carolina): Saunders had character and injury concerns, so it would’ve been a surprise if he was drafted. He is still a talented prospect with decent enough size (6’5”, 270 lbs) to give a shot.

8. Carl Johnson-OG (Florida): At 6”5”, 361 lbs Johnson may be too big for O-line coach Howard Mudd’s taste. His strength is pass protection which is why the Eagles may want to give him a chance.

9. Pierre Allen-DE (Nebraska): At one point Allen was projected to be a 4th round pick, but due to a wrist and calf injury he couldn’t workout at the NFL Combine. If fully healthy, he could be a productive left DE and the Eagles definitely could use the help.

10. DeAndre McDaniel-S (Clemson): Yes, the Eagles drafted Jaquawn Jarrett in the 2nd round last month. But, they still need to ensure they enter the 2011 season with depth at the safety position. McDaniel was initially projected to be a 2nd round pick, but a slow 40 time at the combine concerned teams about his ability in pass coverage. He can play both safety positions and appeared in every game during his time at Clemson.

11. Jasper Simmons-S/KR (Missouri): Simmons may become a good backup safety in the NFL, but his kick return ability will likely be what earns him a roster spot.

12. Craig Marshall-DE (USF): Marshall didn’t put up huge numbers at South Florida, but his size (6’4”, 276 lbs) and motor could make him a good fit in the Eagles rotation.

13. Ian Williams-DT (Notre Dame): The Eagles haven’t had the best of luck with defensive linemen from Notre Dame lately, but Williams is worth the shot. He’s a better run stuffer than pass rusher, but Philly usually bring in four ends on passing downs anyway. Unlike drafting Victor Abiamiri and Trevor Laws in the 2nd round, signing Williams wouldn’t be as big an investment.