Should The Closer’s Job Be Ryan Madson’s For Good? 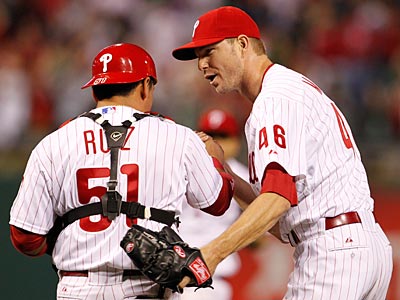 When Ryan Madson has received opportunities to close games in his career, he has struggled in the role. While he would convert a save occasionally in his chances during the 2009 and 2010 seasons, the right-hander was highly unreliable. He blew a number of saves, and the Phillies coaches began to doubt that he had the mentality to be anything more then a set-up man.

In March, the Phillies learned that Brad Lidge would be out until at least June, they opted to go with Jose Contreras as the interim closer until Lidge was ready to return. After it was announced that Contreras would be the closer, both general manager Ruben Amaro Jr. and pitching coach Rich Dubee publically expressed their lack of confidence in Madson’s ability to close. Amaro said “The game speeds up on Madson in the ninth inning, Ryan has not proven to us that he can be a closer in the major leagues.”

Madson himself expressed his desire to get another opportunity to close and Dubee said “What did he do, take a crash course in how to close in the offseason?”

After Contreras went on the disabled list, Madson was placed in the role out of necessity, and he has responded better then anyone could have hoped for. He has converted all eight of his save opportunities, including two consecutive one-run saves. The California native hasn’t been rattled by runners getting on base, and has been able to bear down and get tough outs.

If Madson continues to have success closing games, should he remain in the role even when Lidge and Contreras return? If he has truly overcome the issues that plagued him in the past, then I believe that the job should be his to lose.

Madson may finally be establishing himself as a closer, so why remove him from the role if he is performing it at a high level? Lidge and Madson’s contracts expire after the season, and if the Phillies can determine now that 30-year old reliever is capable of closing, they can factor that into their plans for the next offseason.

It’s time to give Madson a good, long look at the closer’s role. He’s enjoying great success right now, but the real test for him will be how he reacts after he blows a save. If he eventually falters, the Phillies have several alternative options in Lidge and Contreras. If he succeeds, the Phillies will have found the long-term answer for the position.

Absolutely keep Madon as the Closer.. Phils need to worry about adding some punch to this anemic offense and need to add at least 1 Bat (Preferbly a RH OF)
If they can’t protect Howard in the #5 Slot, Howard will get pitched around all season and end up swing at everything like he has lately which I predicted he would back in March.. Francisco/Maybery are 4th OF and not everyday players and scare no opposing Pitchers…

YES… Lidge is a coronary for every fan and doesnt deserve the job..

Wonder if Lidge or Contreras could play the Outfield..

Let’s not anoint him future closer just yet! Remember he’s blown I believe, 30-40% of his career saves prior to this year. Get Heath Bell, say bye bye to Lidge & Madsen.

DD, we all saw Madsen last year, but he seems to be pitching pretty well this year. Watched any games this season? Lidge is gone after this season, so don’t worry about that. I would love Heath Bell, but what are you going to trade for him? And even if you did get him, why would you get rid of Madsen who has been a solid set up guy?

Bugsy, watched every game. Going to be nearly impossible to make any trades, unless the owners bite the bullet on the luxury tax, with more added salary. No one is going to take Blanton, Ibanez or Rollins off our hands. I would love Bell. They could of had him for Werth last year, but Amaro backed out on the deal. As for Madsen I agree so far so good, but history shows he will falter sooner than later. He is a free agent at years end, and Boras his agent is a douche, at will try to rape the Phils. He’s going to want his client as a long term closer, which he hasn’t proven yet. Only 9 saves, relax.