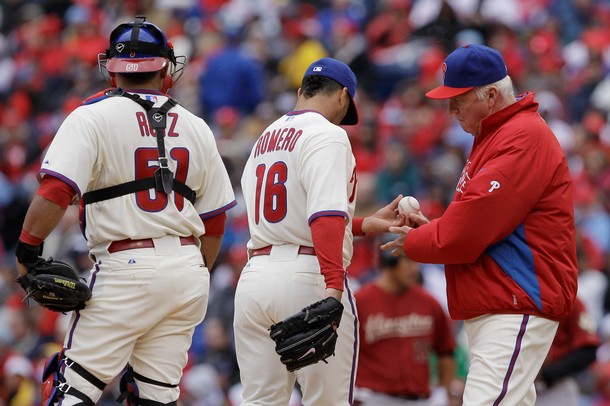 There’s nothing worse for a pitcher than being shown up by a position player on the mound. Though, the opportunity for that to happen is one-in-a-million, the situation can arise when a game gets out of hand and bullpens are dwindling down.

That situation happened last night — or shall I say early this morning — when Wilson Valdez came in to pitch; his performance was quite impressive as he clocked in around 86 MPH and held the Reds’ middle of the order in check.

However, the same could not be said for J.C. Romero last night. The lefty specialist walked three batters (he faced just three batters) in 0.1 IP, and if not for a horrendous base running mistake by Brandon Phillips, could have blown the game for the Phillies. Oh, and Romero threw just four strikes compared to Valdez’s five strikes.

So what’s wrong with Romero?

Allowing runs is one thing that can kill a pitcher’s career, but for Romero, the main cause for his earned runs is his control problems.

A reliever, especially one that is designated as a left-handed specialist, cannot afford to hand out free passes on the mound. If hitters are putting the ball in play, that’s one thing, but when hitters are standing at the plate with a 3-0 count, and Romero is still unable to throw a strike when the batter puts his Louisville Slugger on his shoulder, that’s when problems occur.

Last night, David Herndon and Danys Baez — two pitchers that have received criticism as of late — pitched very well and kept the Phillies alive in the 19 inning thriller.

As of now, Romero is on the hot seat. I don’t want to say it, but he just doesn’t look the same; the 34 year-old might be running out of gas.

What are your thoughts on Romero? Can he work things out?