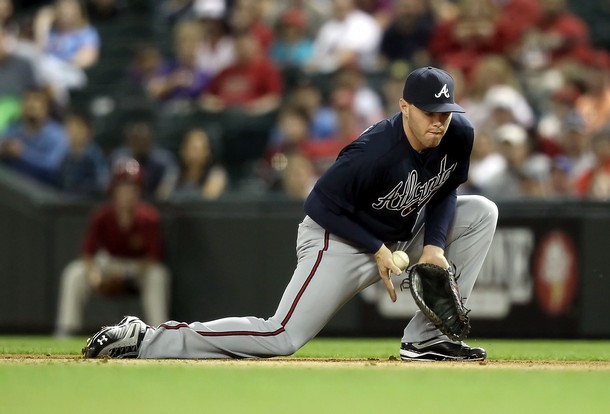 Oddly enough, the Philadelphia Phillies are, in fact, the oldest team in major league baseball with an average age of 30.7 However, it’s not a bad thing to be old — four of the top six oldest teams (Yankees, Red Sox, Rangers, Giants) are all World Series contenders.

But it’s never a bad thing to have youth in your lineup. Just look at the Cleveland Indians (27.7 average age), who are the third youngest team in baseball and currently have one of the top records and baseball.

No team likes to have cracking bones, knees aching, and endless amounts of visits to the disabled list in their clubhouse.

The NL East, as it stands now, contains some of the top rookies in baseball. The same could be said last year as the Atlanta Braves called up their rookie phenom, Jason Heyward, and the New York Mets brought up their prized possession in Ike Davis. Oh, and remember Washington’s Stephen Strasburg?

So, in 2011, where does each team rank in terms of top tier rookies?

Atlanta also has one of the best closers in baseball in Craig Kimbrel. His 14 saves place him among the league leaders in saves, with

four of those saves coming against the Phillies. Brandon Beachy, another rookie for Atlanta, currently has a 1-1 record with a 3.45 ERA; however, he was placed on the 15-day DL with a strained left oblique.

Behind the Braves and their loaded crop of rookies, none of the other NL East teams present a rookie phenom.

The Phillies have Domonic Brown, but he has struggled so far this season in limited playing time. I do expect him to turn things around this season, which should mean that Philadelphia will have the second best rookie class in the NL East.

And then there’s the New York Mets and their surprisingly impressive starter, Dillon Gee. With a record of 4-0, Gee has gone 40 innings, striking out 29 batters and maintaining a 3.83 ERA for the lowly Mets. Along with Gee, the Mets have another rookie in

The Nationals best prospect, Bryce Harper, has yet to be called up and will most likely never get that call in 2011. Instead, the Nats have sent out rookie second baseman Danny Espinosa, who is stuck at the Mendoza line (.200) and has struck out at a high-rate (40 times). However, Espinosa has racked up four triples and six doubles.

The Marlins, who generally always have a rookie somewhere in their lineup, do not have any first year players in their clubhouse right now.

So, which of the above mentioned rookies will turn out to be the best big leaguer? Do any of these rookies have a chance at Rookie of the Year?

Not Yet Scottie, LeBron James Doesn’t Have Michael Jordan’s Passion For Winning

The Braves have some young talent on their Roster
1B- Freeman, RF J Heyward, LF M Prado
Starting Pitchers J Jurrjens, T Hanson, B Beachy & J Tehran,
Quality Relievers in D Medlin, J Venters & Closer G Kimbrel..
That they should be able to compete for the next few years as they still have solid Veterans in B McCann, D Uggla, N McClouth, A Gonzales, E Hinskie and old timer C Jones who is probably in his last season along with Veteran Pitchers in Hudson and Lowe to help the young PItchers..
Both Freeman and Heyward project to be 20-30 HR’s – 100 RBI’s type of hitters as they mature, Freeman appears to have better discipline at the plate where Heyward is more of a free-swinger..but these 2 players will be the cornerstone of the Braves Line-up for the next 5-8 years and should compete with th Phils for the foreseeable future ..

Paulman’s hardon for the Braves is both inappropriately misplaced and repulsive. I also contend that it’s malicious in a sickly innocent way – he’s oblivious to the way he is just so so wrong

The Phillies offense has surprisingly been doing well since Utley came back. Coincidence? I don’t know. He hasn’t been doing well, but his presence could put pressure on opposing pitchers, and thus have an effect that has the rest of the team hitting well. Also, Dom Brown has been batting nicely since his return.

Paulman was still counting out the Phillies knowing these guys are coming back, saying that he doubts they will improve the offense where it needs to be, yet the Braves just ain’t doing any better.

It is still early, and this could be just a little energy boost that the rest of the team is having because of Utley’s return, but I like the way it looks right now, and with some at bats from both Utley and Brown, they should get even better.

We still need that right handed outfielder bat. Never get too comfortable. I want another ring. We won’t get one from the FO weasels on the green team. Reid must be pushing 425 lbs. What a picture of health he is.

The Phils have been playing very well since Utley’s return..
Ibanez has had a strong 2-3 weeks with lots of key timely hits bringing his average up almost .50 points.. Starting PItching is on a roll as it has all year and the Bullpen has pitched better than expected all Season..
I have not affection for the Braves, their Offense has been up and down also like almost every team. They’ve gotten very little production from 2B D Uggla and Both RF Heyward & 3B C Jones have missed lots of games but they are still in shouting distance of the Phils..
The Marlins have lots of young talent too and have been playing great ball with SS H RAmirez having a very poor Season and TOp PItcher J Johnson missing a couple of Starts.. Both the Marlins & Braves will stay close and will actually help the Phils be better by seasons end..

Paulman just stop. The Braves are 4.5 games back, and the Phillies have been brutalized by injuries. I dont know what Dom Browns avg was when this article posted, but it is over .300 and he is 22 right? They havent had their entire lineup play yet this season, and have the best record in the majors. Their major question mark bullpen has turned into an answer as Madson is unhittable for the most part. Stop telling us how unfortunate the braves season is going. The phillies had zero production out of their outfield, and were missing their best player.