The Eagles Would Be A Great Subject On HBO’s Hardknocks 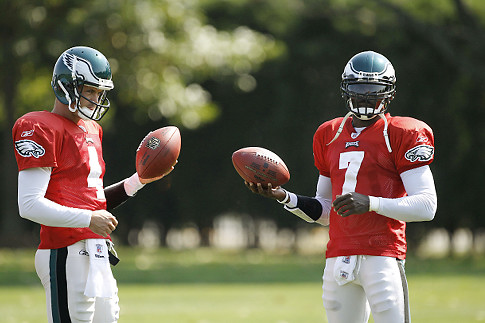 NFL Films and HBO sports haven’t been able to reach an agreement with an NFL team on the Hardknocks reality show. So far every team which they have approached has turned them down.

What would you think about the Eagles agreeing to do the show? Could you imagine a Hardknocks show with Michael Vick, DeSean Jackson, Asante Samuel and head coach Andy Reid?

The animal rights people would probably dust off their signs and show up, if they thought they could get some publicity.

Eagles fans and NFL fans nationwide would get the chance to see what new defensive coordinator Juan Castillo is teaching on the defensive side of the ball. He’s been emphasizing simplicity and the fans would be able to get a good feel for where he was taking the defense.

We could get an upclose look at the Eagles new defensive line coach Jim Washburn and see how he’s working the Birds defensive line.

New offensive line coach Howard Mudd would be putting in the new blitz pickups and adjustments at the line of scrimmage. I’m sure that Mudd would mistakenly call Michael Vick, Peyton Manning a few times and we would all get a laugh out of that.

Could imagine if Kevin Kolb was at camp and going through the practices, while at the same time, rumors of a trade being worked out would be talked about every day? The probable trade of Kolb by the Eagles has been the number one football story of the lockout, so it would be fitting that Hardknocks would be able to show much of the behind the scenes goings on as the trade comes to fruition.

To say the least, the show would be highly watched and rival what Rex Ryan and the New York Jets did a year ago.

On the negative side, teams which have been unsettled at the quarterback position and at head coach have gone on to have bad seasons. Hardknocks makes a bad team worse. The Eagles have a good football team and are settled at head coach and at quarterback, so they shouldn’t have a problem.

What do you think? Would you like to see the Eagles become the subject of this year’s HBO show?

Truth of the matter is, if they volunteered to do it this year, they wouldn’t have to do it until next season because it doesn’t look like we’re going to have a preseason.

Do The Eagles Really Think Mike Kafka Is Ready To Backup Vick?

You hyped that up real good. Im ready to watch something like that. Would be good TV

That would be a great show G……. The Eagles were the most popular team last season and will be for a number of years………. The most bandwagon team in my eyes….. With D-Jax’s swag and Avant being the HOLY man of the team calming players down and mentoring the younger group of players will show great ying and yang with this young football team…… With the whole feud between
Akers vs. Henery……..
Kolb trade saga…….
Washburn with him cursing the d-line players……..
New defensive coordinator coach Juan Castillio and how he handles the pressure of changing to a new gig…….
Andy Reid eating on the sideline with crumbs in mustache……..
Mike Vick…. Being Mike Vick with chap stick being used at every minute…….
J. Chaney battles S. Bradley……..
The all american Fireman D. Watkins with H. Mudd giving him a good lesson on greatness…….
Mike Caldwell working with this young LB core and telling them how it is to wear Eagle Green……. And follow tradition……
It would be a great show……..

What other team in the NFL would make a better show????? The Jets season was great…….. Besides the Jets it has to be the Eagles…..

Chargers could be a good one but it will get boring after a while….
Giants it would become a Coughlin show……. More like desperate housewives…… Or him being the Rodney Dangerfield of coaching….. “I get no respect”!……… His players give him hell……. LOL
Patriots BORING……..
Panthers…. Not enough stars it would become the Newton Show starring Cam Newton and nobody else……
Ravens would be good but I think they already had a season on the show
Seahawks……. It rains so much there who would want to see that one…….
Everyone else would be a waste of time…….

LMAO@Tberry……. I feel you bro……… Man before this whole 2012 non-sense…… Please can we all go out happy as Eagle Fans………. I dont want Andy Reid being the Harold Camping of our franchise LMAO…….. That was a low blow…… But I had to go their…….

No , as much as I would like it they will not do it and we are trying to win a SB not a Emmy.

hey, you can kick the idea around for fun all you want, but it comes down to a team agreeing to do it. And the Eagles motivation to sign up for it would be….uh… what exactly? That’s the bottom line.

Much Respect Shiller……. I like your blogs……. You keep me laughing and I do enjoy your character or true side…….. We agree to disagree……. Much respect!!!!!!!!! Keep doing your thing!!!!

Yeah it does sound great, but in reality, Reid and the media don’t mix like oil and water. Would be a helluva of a show though.

ha, no beef jroc, until paulman’s reference, i didn’t even consider you to be a ‘rival’… songs pauli and big e usually get me riled the most. But I guess my reputation preceeds me. i didn’t even comment about any poster or direct anything at or about someone’s opinion here. I just stated what I see as the probability/lack there of.

HAHAHAHA……. I hear you shiller…… Your a facts type guy and I respect that…….. Some of us hope/wish things could happen in our fantasy world at times…… It’s just hard being an Eagles fan……. We beef about stuff and at the end of the day…… We’re Eagle fans…. LOL…… Keep it going no beef on my end as well……… Men will be men………

it is definitely hard being an eagles fan – no ‘beef’ or even disagreement their. At all. I’ll always hear my Dad’s (RIP) voice ‘son, sports is pain’…

Jeff Lurie says only if I can get Exec Producer credit

Please don’t give this organization anymore attention unless it’s negative. This disgrace of an owner and his weasels in the FO and a 400 lb used car salesman will always make money, but we will see no ring. REID makes me sick everytime he jokes about his weight and eating habits. Would it be a joke if he drops dead from being 150lbs over-weight?

LOL at GottaLuv good one!

Gotta luv it! only if he is nominated for an acadamy award too. Lurie is another pompous, egomaniac, jackass, weasel, just like Reid & Banner. This organization is a very unlikable bunch. They better be thankful to God every day, to have this towns fans me included, who are such loyal & rabid Eagles fans. Because they suck elephant Cogliones. BTW, that’s Italian for balls.

DDCar: Everyday Lurie and Banner give thanks to the Lord for having such great, eloquent, and intelligent fans as you! They need non-pompous, ego-less, non-jackass, non-weasel fans like you to fill the stadium with your beer-swizzling Cogliones to get drunk, yell cursewords, and be eloquent.

TBERRY…you made me laugh out loud at work!!!!
i feel the same way. Forget all that other stuff..win the big game for christ sake’s…geez….