Dirk Nowitzki Takes Over Down The Stretch For Mavs, 95-93 Win 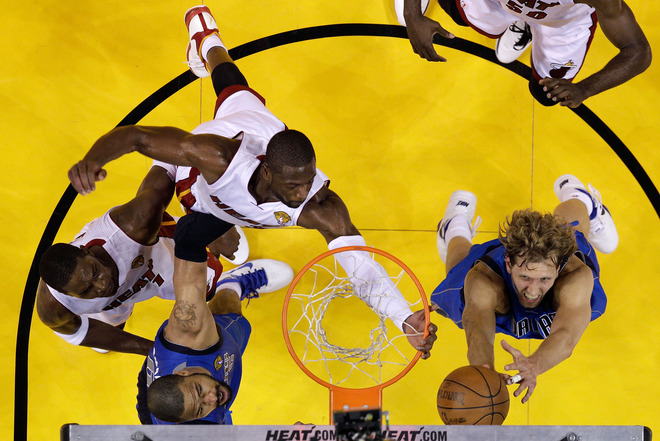 For all intents and purposes, the Dallas Mavericks did what they were supposed to do – win one of two in Miami.

The Mavericks took advantage missed shots, poor shot selection and turnovers to rally back from a 15-point fourth quarter deficit to steal a 95-93 victory evening the NBA Finals series at one game apiece.

Dirk Nowitzki, playing with a torn tendon in his left middle finger led the Mavericks with 24 points, including a layup to give them the lead for good with 3.6 seconds remaining in regulation.

The loss ruined a great game for Dwayne Wade who returned to form with 36 points 5 rebounds and 6 assists. Wade had several great finishes below and above the rim during the game, it was his three-pointer (adding a pose for emphasis) with 7:14 remaining that put the Heat up by 15, prompting Dallas to call a timeout.

The Mavericks came out of the timeout and went on a 11-0 run before the Heat would score again on two Lebron James (20 pts.) free throws. Miami as a team shot 1 for 11 following Wade’s three. James missed two long threes and Udonis Haslem took an ill-advised 15 footer that led to Nowitzki scoring the Mavs final seven points, including a three with 26.7 remaining.

The Mavericks blew an opportunity to pull away leading by nine points but the Heat closed strong in the final minutes (Wade 5 pts.) to tie the game at 51 going into the intermission.

In the 3rd quarter the Mavs committed six turnovers leading to 12 Heat points, Mike Bibby finally broke through scoring 8 of his 14 points in the period. Nowitzki and Shawn Marion led the Mavs with 6 points each.

Other keys to victory for the Mavs last night was the continued timely play of Shawn Marion, I don’t know how long he can keep his level of play up but he’s having a good series. Tyson Chandler was very active offensively. The Mavericks are going to need Jason Terry (5-11,16 pts. 0-2 3pt.) to get going if they want to keep Miami on their heels in this series.

For the first time in quite awhile Chris Bosh struggled, Bosh was 4-16 from the floor for 12 points, he and James led the team with 8 rebounds each. More discouraging was the Heat’s bench production which was outscored 23-9. Not to be overlooked was the Heat’s defense which from the outset gave the Mavericks problems 31 points on 20 turnovers is huge. But the Mavs stayed the course and took advantage of every opportunity down the stretch to gain some momentum going back to Dallas for Game 3.

Big D Dominates Down the stretch

What’s your feel for who wins the series, Ron?

@fran, I picked Miami in seven games based on their play on the defensive end and with James and Bosh playing well in that series you knew it would only be a matter of time before Wade came around. I didn’t ser this being a 4 or 5 games series because of Dallas shooting ability and the fact that there is no answer for #41. I didn’t understand the predictions for sweeps and a five game series. Dallas swept the Lakers and handles OKC pretty good, no way they were going out that easily. But if Miami lost, no tears from me for them or “Bron-Bron’s” favorite minion. I just want the Sixers to improve in this season, that’s all.

While I fail to recognize Lebron as heir apparent-yet, I have to say the guy did impress me with his defense through the playoffs. He can cover almost any position on the floor and do it well. I think the series can go in either direction at this point. Dallas is a pretty dominant home team and should at least take 2 of 3. That Miami comes home needing 2 in a row. If they are able to do this, they will have vanquished alot of the questions about their tenacity or ability to close out.

I agree on all those points. LeBron was the complete player in that Chicago series. I think Dallas wins Games 3 and 5.

One thing to keep in mind about Lebron Defensive Prowess he displayed versus the Chicago Bulls, is that the Bulls (outsdie og Guard Rose) had no real offensive threats so Lebron could roam around and fly after the ball and help contain Rose (which everyone knows is/was the key to stopping the Bulls attack)
The Mavs are a different animal and have a much more versatile,quality and deep roster with Offensive players on their squad .. Lebron isn’t going to be able to free-lance around like he did versus the Bull.. .

I think this Series is going 7 games with the Mavs winning it on Miami’s floor.. If Shawn Marion plays and contributes like he did the other night, the Mavs will be hard to stop.

Of all teams to struggle against bosh struggles against the mavs, there defense isnt even that formidable, he just gotta calm down and play his game. Hes really the key to the series just like the other series. Wade Bron Bron are gonna get theres, but whether they are or not they need consistent output from Bosh. Hes the key to the series along with the heat playing aggressive defense for 48 mins not just 40… They ll get it done tmr…

The Bulls did get a little predictable on offense. They seem to rely on too many offensive rebounds as offense. However, as much as it pains me to admit it, Lebron did a good job keeping Rose in front of him. He always had help at the basket, but he did manage to stick to Rose pretty well. With his size and athletic ability, Lebron is a true freak of nature athlete. But as some of us know, ridiculous athletes are a dime a dozen in the pros and it is what is upstairs and in a player’s heart that makes them a true champ. When the Heat were up by 15 and they needed points to stop a surging Mavs team, the easiest way to do that is to drive to the hoop and get fouled and head to the stripe. However, you have to be willing to take the bumps to get the points. Heck, Lebron gets calls that aren’t even there. Yet he still is satisfied to jack up falling away 3 pointers. That is Spoelstra’s fault as well, but let’s be honest–he has no juice on that team. He may have the greatest plays in the world, but his guys regularly break from his plays and freelance.
I think the Heat have a decent chance at winning the championship based on individual talent alone. However, I really hope the Mavs win. I would love to see Kidd finally get his ring and I like the way the Mavs play team ball.

To JH,
The Key match=up to me has come to the PF spot where the Mavs T Chandler is outplaying C Bosh.. HE’s more physical, as athletic with long arms and quick feet and doesn’t mind mixing it up.. We all know that Bosh’s history has shown that he can get a little tentative and lose his agreesiveness when he’s pushed around and challenged and T Chander is getting the best of him right now..
The Way I look at this Series is that LeBron/Wade are going to get their Points and Production matched by the Mavs big 3 of Nowitzki/Marion/Terry.
when you add other solid Offensive production from a Kidd,Stojavick then the Mavs are in trouble unless Bosh can outplay and outproduce Mavs T Chandler and so far, he has not… This is the Key-Match-up for the Heat and they really need someone from a Bibby,Jones,Miller to score some points…
Game 3 is a pivotal game in Championship Series that is tied 1-1, I think the Heat need game 3 more after their collapse at home the last 6 minutes in blowing game #2, If Mavs win game 3, they go on and win the Series in 6 or 7games

Bosh is going to struggle against Dirk because he doesn’t set up like a traditional PF. Players like Brand and Boozer set up on the block and either go right in or work out to 13-15 ft. Garnett was able to mix it up better because he has a better outside touch and is more fluid than the other two. With Dirk he sets up on the perimeter and is either gonna work his way in, work inside or go out further and Dirk runs around more than any PF I’ve ever seen. Bottom line if Bosh has to really work defensively there’s a good chance he’ll struggle. Bosh’s number in playoffs: Phila. 19ppg, Boston 13ppg, Chicago 23ppg.

Guys, there gonna need bosh in the finals to score and defend. Honestly the best defense ive seen on dirk came from haslem, but as you can see wade is having another huge game, bosh is plating much better but now they gotta finish this game out…

Time to close this game out Wade! Lets Go!!!!

You guys can now call me Nostrodamus lol

Great game by Series MVP so far D Wade, he was unstoppable
I will now give up my title of Paulmandomis to Jon Hartrodamus…

There is a new number 1 overall best NBA Superstar in the league, its a close race between the two but the edge goes to DWADE, DWADE IS CURRENTLY THE BEST OVERALL NBA SUPERSTAR BOTTOM LINE

Laughable, that’s all I can say.

Lebron & D wade got this title just about wrapped up..

btw. whoever is in charge of doing the recaps for this series is seriously slacking off..

sheed – this is HARDLY a basketball site…..

@Sheed there was a mixup on who was going to put it out Garry or myself. I’ll take the heat for that one. I’ll definitely have tonight’s recap in along with some stuff from Game 3. My bad.

No problem Ron.. Sorry if it came off as a criticism…. wasnt meant that way…

Sale of the Philadelphia 76ers is “imminent” to a New York based leveraged buyout specialist Joshua Harris, worth about $1.5 billion in 2011 according to Forbes Magazine.

Wow, nice Ron. Wouldn’t it be great to get the Hockey loving scumbag (Ed Synder) out of the picture!? Do you think that could be a nice fresh start at the top Ron?

I’m worried about them keeping Collins around.

Harris is going in with two other gentlemen, one is former NBA agent and Sacramento Kings Exec. Jason Levien. Both have graduated from the Wharton School. So there is some NBA knowledge in the board room.

ron – Yeah, if these guys come in here with a plan that includes ousting Collins, the city should revolt. Violently.

They have a good thing in place and I hope they realize that.

Agreed. In my mind, the whole organization was on a great uptick, but the exception was that loser up top. So I hear your concern, and 2nd that, but I’m hoping that new ownership (yes, assuming they keep Collins/the good piece on the team) will mean that all the Billy King/everything except Iverson crap we’ve been dealing with for a long time won’t reoccur in the near future.