Private Negotiations Are A Good Idea For The NFL 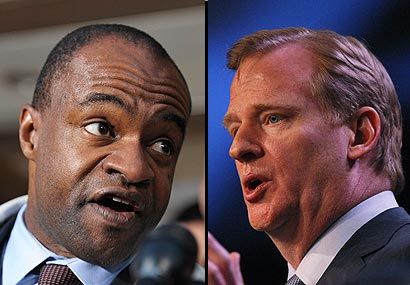 If the 8th U.S. Circuit Court of Appeals rules on behalf of the NFL owners after yesterday’s hearing, then the owners will have a strangle hold on the players. If that happens it will be just a matter of time until players start to publicly “cry the blues” and the lockout will end.

I don’t think the owners want this lockout to continue because as NFL Commissioner Roger Goodell said, they run the risk of alienating more of their fans. There’s been an erosion of interest in the NFL because of the lockout, but chances are that won’t be a problem if the work stoppage doesn’t last.

On the other hand, if the league were to cancel some games in the fall, a certain percentage NFL fans might decide to abandon the game and not return. I don’t think that’s a concern now, but it may be in a couple of months.

If the players don’t get help from the three-judge panel, it will give the owners a chance to implement their strategy, which is to starve the players of money until they agree to take a smaller percentage of the league revenues each year.

DeMaurice Smith has been participating in behind-the-scenes negotiations. He has to know the mindset of the many players, who aren’t willing to lose money over this fight. He’s got to start softening his position and working toward an agreement. Doing that before the players see the 8th Circuit Court rule against them are a good idea.

Earlier this week, Eagles tight end Brent Celek made it clear that this lockout is no problem until he and fellow NFL players start losing money. Celek, who signed a big multi-million dollar deal a couple of years ago, knows that even if the players get a lower percentage of the total NFL revenue, they’re going to still make more money because the NFL revenue is expected to increase substantially in the near future.

Celek needs to keep his mouth shut for what he said was a stupid comment..
Plus he’s wrong for look at the bottom half of any roster where players are not making the big-bucks like Celek is.. Many of these younger players don’t have the Savings, the support that a higher paid Veteran does.. Lots of these younger players have to share Apartments for their OTA/Tryouts/CAmps for many of them may not make a NFL Roster.. For every established Veteran who has already made big ## and has other off-the field Business Interests to make some $$$, there are 20 younger players that are not and are scraping by in the unknown..
The Players Assocaition really gambled that by “Decertifying” and by suiing the NFL with high Profile players like Brady,MAnning,Brees that with Public Support the Courts would see things their way and it failed.. The Lawsuit actually turned public support off and now be “decertifying” some of Labor Laws that could be used in arguments are tossed aside sinec the players don’t technically have a Union.. The Owners will always have the Upper Hand and have time and resources at their disposal, Th Player come and go and it’s the way it is. Keep negoitiating is the only way that this Labor Dispute will come to an end and right now, the Leadership of the Players Group and their Lawyers better put pride and ego aside and get this done for the next 2-3 weeks are critical if there will be a full Summer Camp and a full 16 Game Regular Season.. If not, then I expect Preseason to be shorten by 2 games inititally, and then start canceling Regular Season game for each week that goes by..

lol i havent missed anything i see

Where’s Reagan when we need him. Fire all the mother f’ers.

I have no sympathy at all for either side. Let them cry and whine and delay the season. I’ll get more done around the house.

They aren’t going to negotiate jack. Both sides are going to let the litigation play out, they have to do it that way now. If they owners win (which it is starting to look like, the fat broad is warming up offstage) they are going to break the union and jam a deal down the player’s throats when the players start missing checks. The players are in Hail Mary mode, praying that the two justices that have already spoken against them have a change of heart. If they cannnot get the lock out blocked, they are going to have to take whatever the owners offer. A pox on both their houses.

I think the Players will cave in and agree to a 50-50% Split on the Revenue after the Owners take the Top $2 Billion Off (For Capital Improvements/Loans to Franchises,Community Events,League Expansion and Legal matters,Lawyers costs from this Holdout,etc,etc)
The Players will then agree to drop all pending Lawsuits that concern this Lockout and any other Labor Concerns ..The Players will then Re-Unionize .
The Owners will agree to keep the Schedule at 16 Games and 3 Preseason Games, To Increase the benefits and Insurance packages for more Veteran Players. The Also agree to expand the Active Roster to 57 Players and expan the Practice Sqads to 10 Players per Team which adds about 200 Players to the Players Union
The Players will agree to a Rookie Sliding Salary Range based on where a player selected starting with th eplayers chosed in this 2011 Draft and for the future Drafts. The Owners will agree to allow players to become Free-Agents after 4 years of Service, Franchise Tags will continued to be allowed as will Transitional Tags on players but for only 1 Time for any player..

Please for the love of God, would someone just smash D. Smith & Goodell’s heads 2gether like 2 Jersey tomatoes. They both are greedy f^@#ing scum sucking dirtbags. D. Smith is just trying to making a name for himself at the players expense, while racking up the cash for his Law firm with all this litigation. Goodell’s the greedy f^@#ing scumbag owners lacky, who’s there to exploit & rape the players of everything they can get from them! The only one’s that this is affecting is us, the fans. They killed the draft & Vampired every bit of the fun & excitement out of this off season. F you D. Smith, F you Goodell, F you Owners, F you NFL & F you NFPA/ NTA or whatever bogus name your using. I’ll go to work, the gym, the shore & movies with my time with my girlfriend. GO STAIGHT TO HELL, WITH GASOLINE UNDERWEAR!

Oh & a double F YOU JERRY JONES! You plastic faced grease oil salesman! I hope you go there 1st!

LOL…How is this affecting the Fans…I haven’t missed a paycheck since the lockout began….Why do some fans care this much about somebody else’s paycheck ? I don’t understand….I love the Game of football…and there will be Football somewhere this fall whether it’s my son in Pop Warner or Nephew in High School I will still be able to see the game I love….