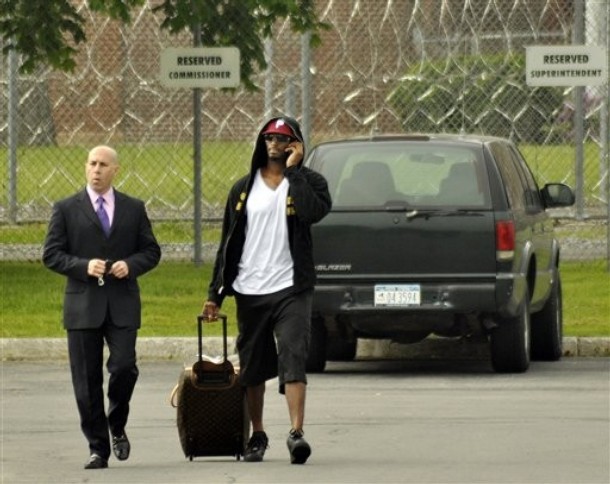 For the past several weeks, numerous media outlets have been reporting that there is a mutual interest between the Philadelphia Eagles and the trigger happy Plaxico Burress. But, one guy threw some water on those reports and told us to trust him that all of these stories are leaking from Burress’ camp.

That was Jeff McLane of the Philadelphia Inquirer, who tweeted, “One more thing on Plaxico. All this talk about the #Eagles being interested is coming from Plax’s people, not the #Eagles. Trust me on this,” back on June 3rd.

That’s all well and good and I had no reason not to believe him. But today, he tweeted this:

“Re: Plaxico Burress and the #Eagles. Spoke to several team sources and there’s certainly interest there. …”

Okay, but pardon me if I’m confused. I would assume he spoke to team sources last week when he told us that all of those stories were coming from Burress and not the Eagles. I know he didn’t say that the Eagles had no interest, but he says to trust him that not one of those stories came from the NovaCare Complex.

Isn’t the only way he could say that the stories weren’t coming from the Eagles is if he was told that there was no interest on their part? Otherwise….how would any one person know who is leaking what to whom?

I’m not trying to knock McLane here; I think he does a pretty good job. But I wish reporters would hold off on the “trust me on this” rhetoric when they end up singing a different tune just a week later.

Reid & Lurie On Burress: Haven’t Considered Him Yet, But May In The Future

LeBron James Has No Where To Hide, He Must Step Up Or Shut Up

I hope he can help in the red zone on D too.

Honestly, i like it. My fear is that he would rather get a big contract over playing for a good team. But if he really wants to play with Vick and the young guns…. he will take less money to play here. If it happens…. bring him in slowly and see how it goes. He does not need to be on the field on every play.

I really really hope though that we get that RCB tied down the minute this thing busts open.

Micah, this is the guy that said McNabb to the Rams was a done deal. Enough said.

lol- good memory Scorp- i forgot about that one.

I am not sure if I ever told anyone , but Paulman and Jeff McLane have the same “Pharmacist”.. Good Grief…

There were whispers that the eagles had interest in signing Plaxico while the man was still in prison/ there gotta be some truth to that, micah didnt have to pull the mans card but its the honest truth… I read McLanes articles, hes a quality writer and eagle informer. I think he may have gotten a little mixed up with his information he wrote… I still feel that the eagles will sign Plaxico and that Plaxico wants to play here, I doubt that Plaxico will get a huge contract offer from anyone so he ll want to play for a team on the cusp, that being the eagles…

This is the **Hartrodomus** prediction, Mike Vick will win the MVP and the eagles will sign Plaxico Burress…

Paulmans Predictions
No Vick MVP, No Burress, No Asmo and no Free-Agency since there will be no Football in 2011..

Paul, that couldnt be farther from the truth.. i actually think theyll strike a deal soon… possibly by july… lets hope…

would anyone out there take a shot at the pryer kid out of ohio state in supplamental draft? i think i would for a 7th rounder , you would be getting maybe a multi purpose athlete.

Yeah the birds could use him in the redzone too… he could be our randall el, someone who can throw the ball and catch it too…

They won’t reach a CBA agreement til the middle of July.

On a serious note,
I think they will settle in mid-late July also (which I stated a few times back around Draft time) , Probably only 2 or 3 Preseason games will be played and a strong possibility that the first 2 weeks of games get start cancelled or they condense the schedule, (no Bye-Week and play a missed game at the end of the regular season to give a 16 wgame schedule).. but I would expect the quality of play to stink the first month of the regualr season.. I see many teams rolling th edice and staying with as many young players they drafted to make their final rosters.. There will be a lot of bigger name verterans cut,released from clubs and especially if copming off an injury, a disappointing 2010 Season or have too large of a salary.. Most teams will be putting a roster together for the longer term and probably saying bye to many veteran players as they move forwad and especially teams with new HC who are building their own programs with their own players. Look for teams like Denver,Minnesota,Titans,Bengals,Redskins,Panthers cut some good veteran players since these teams are clearly rebuilding for the future..Even the COwboys may release,waive older players out (M Barber,Roy WIlliams,T Newman,etc,etc)
Good teams like the Eagles may be able to pick-up a released player or 2 for cheap who can fill a short-term need or add quality depth… B Dawkins maybe released from Broncos and return to Phila for a season as N Allen recovers, wouldn’t doubt it for a minute….

HAHAHA! Paul, I new you were on meds. It’s a done deal gents. To much smoke there not to be a fire. Reids ego is as huge as himself, he now thinks he is some kind of savior now, because of Vick. I think it’s a done deal. WINK WINK, NOD NOD. Know what I mean 😉

Not to change the subject.. but Titans WR K Britt was arrested again today (his 3rd maybe 4th time in the last 2 years..) My Sources in Old Opry LAnd tell me the New Coaches and staff are livid and have had it with guy.. He’s from NJ and will probably get released by the Titans .. He’s 24,very immature, but about 6’5 230lbs who toatsed the Eagles and single-handily won that game for them and thus put a nail in Kolb’s Coffin about ever being a #1 Starter in Philly.. Talk about 2nd/3rd chances. .what’s everyone think about this Britt character who played at Rutgers…

Once a thug, always a thug! Some of these guys don’t realize how blessed they are & continue to make dumb, idiotic mistakes & ruin what good lives that they have been blessed with. Stupid jackass! Put em all in jail & give their money to the Police, fire dept., military personal & every hard working man trying to survive in this f^@ked up world. These stupid, jackass, athletes, do not deserve to be paid the way they are to play children’s games. Give money to people that never had & alot of them do not know how to act. It should be a rule that every million ere should be given a financial advisor upon signing.

Why do people constantly quote McLane?? This is the dude who called the McNabb to Raiders trade a done deal last year.

Mim your right, the guy is a dunce that just throws darts with his stories, & rumors. Or he just might have the same sources as Paulman. 😀

That’s what happens today with the shady reporting & all of the media trying to get the jump on one another. No ethics, research or true journalism. Most of the media in this city sucks & are butt munchers for the teams they write for. Do your job right & stop the bull shit, or go flip burgers somewhere, you idiots! Micah, G, you both are excluded. ;D

DDcar,
McLane and I share the same Pharmicist, but that’s it.. My Sources are deep undercover and will have nothing to do with McLane… ha ha

Eagles Trade K Kolb, J Avant and a 3nd Round Draft pick in 2013 to the Tennessee Titans for QB V Young and WR K Britt ……

(Leighanne Rhymes told me this, during our morning shower)

Thats why I like your comments & opinions Paul, your a funny man. You take it & brush it off. Good man. 🙂