Phillies Should Stop Handing the Ball To J.C. Romero 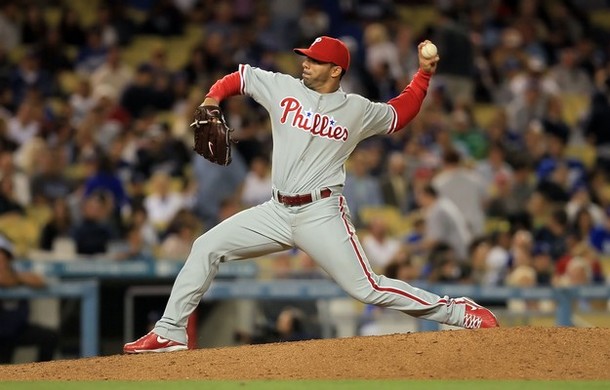 If Charlie Manuel had left J.C. Romero in the game, the Phillies would have coughed up that lead and lost the game to the Chicago Cubs.

Could Ruben Amaro Jr. do the right thing and get rid of Romero? He can’t throw strikes and he never leaves things in a better condition than he finds them. The guy is a walking can of gasoline.

I hold my breath when I see him heading to the mound. What does he do immediately?

He falls behind hitters, starts walking guys which guarantees trouble. Romero has surrendered 12 walks in only 15 1/3 innings. That’s close to allowing a walk an inning. His stuff isn’t good enough to be able to survive with such a lack of control.

Jose Contreras isn’t far behind Romero. He has come back down to earth which isn’t a surprise, but he pitched great when Charlie Manuel inserted him in the role of being the team’s closer. The veteran pitcher has seen his better days and he must improve his performance or Manuel will have to stop sending him out there.

He’s got some time to show improvement.

Romero on the other hand, hasn’t impressed anybody in years. He was awful last year, but Manuel had patience with him. Time has to be running out on him. I’ve had enough of him, I’m waiting for Manuel to get to the point where he feels the same way.

LeBron James Has No Where To Hide, He Must Step Up Or Shut Up