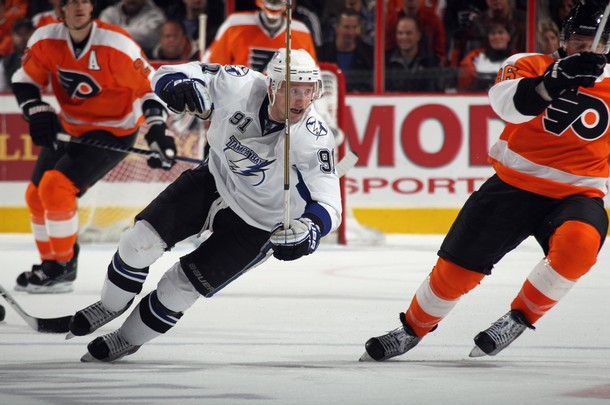 There were rumors shortly after the Flyers traded Jeff Carter and Mike Richards that they were considering making moves to acquire centers Brad Richards or Steve Stamkos.

Richards is considered to be a lock for the New York Rangers, but the status of restricted free agent Stamkos is in question with free agency looming in less than 40 hours. Stamkos’ agent is expected to meet with Steve Yzerman, general manager of the Tampa Bay Lightning, again tomorrow.

The consensus among reporters seems to be that there is no consensus within the organization whether or not to extend an offer sheet to Stamkos. Stamkos is without question one of the top five forwards in the NHL and an opportunity like this will not come again for some time.

However, making this move would throw any semblance of a plan that the Flyers had for long-term success completely out the window. The potential numbers being thrown out by Frank Seravalli of Daily News are $115 million over 12+ years, or a $9.58± million cap hit.

There is no feasible way the organization could sign him without giving up a substantial amount of first round draft picks and key roster players. Possibly some combination of Danny Briere or Claude Giroux with Matt Carle, Kris Versteeg or Scott Hartnell would have to move, and the cheaper talent required to fill in the roster gaps would render it more of a lateral move than a forward one.

The other problem with preparing an offer sheet for Stamkos is that the Lightning would have up to seven days to match the offer. During that time, the Flyers would be unable to sign free agents, as they would have no idea how much salary they have available.

While the free agent market is not heavy on top end talent, there are a number of quality depth players that they could round out the roster with rather than further shake up the team.  Depth is key for any Stanley Cup contending team; the Pittsburgh Penguins performed admirably without two of their best centers this past season in no small part to their quality farm system.

Every day Stamkos goes unsigned is another day that I have to wonder just how crazy Paul Holmgren is. Will he pull the trigger to further assemble his fantasy team or play it safe?