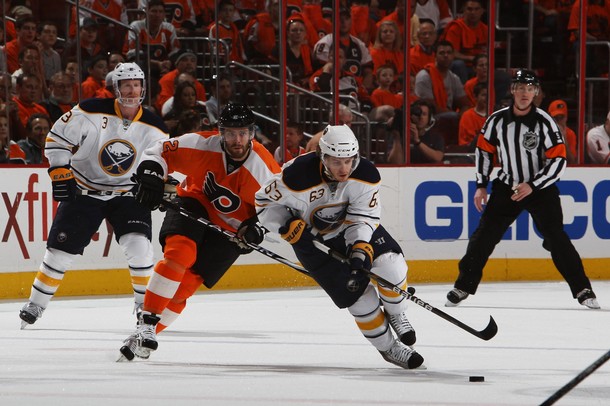 It’s amazing how different the 2011-12 Flyers will look compared to this past season’s team, but you have to give general manager Paul Holmgren some credit for not being afraid to mix up what didn’t appear to be working. We’ve heard the moves that the Flyers made today, but what happened to last year’s players?

Leino made a comment after the signing that rubbed me the wrong way: “To be honest with you, I think [the Sabres] deserved to win.” Be that as it may, ouch dude.

There are a number of players floating around that haven’t found homes yet that I find intriguing, including Simon Gagne, Tomas Vokoun, and Michael Handzus. It’s frustrating to think the Flyers could have waited until free agency to decide between Ilya Bryzgalov or Vokoun and signed one of them to better terms than what they have now, but what’s done is done.

According to Dave Isaac of Philly Sports Daily, they’ve contacted Gagne’s agent and there is mutual interest from both parties.  I’m surprised, but glad to hear it.

Handzus was reported as having been signed by the Flyers less than 30 minutes into free agency, but it turned out to be a fabrication. He has not been signed by anyone yet. The Handzus rumor was followed by another widely reported fabrication that Braydon Coburn had been extended two years.

Finally, the Flyers did speak with Brad Richards’ agent today, but did not make a hard sell and are not as serious contenders as the LA Kings and New York Rangers. Rumors are circulating that they are making space, however, to go after a restricted free agent. If I were a betting man, I’d say they are waiting for the fallout of the Richards signing to see who will be in salary cap hell and won’t be able to match an offer.

The Kings have stud defenseman Drew Doughty to sign while the Rangers have stud forwards Ryan Callahan and Brandon Dubinsky. Suffice it to say, there is blood in the water and the Flyers can smell it.