Are Phillies Headed For The Same Fate As The 2001 Mariners? 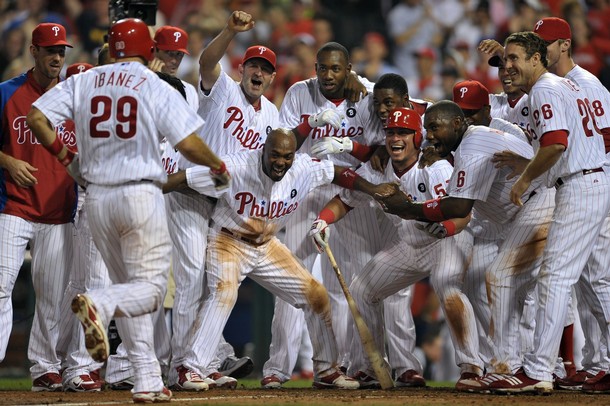 Is this 2011 Phillies team destined to fall in the playoffs like the 2001 Mariners?

Not necessarily. But it’s a comparison recently made by Paul Hagen of the Philadelphia Daily News.

For those who don’t know the story of the 2001 Mariners, the team wound up finishing with a league-best 116-46 record but lost in the ALCS to the New York Yankees in what was one of the biggest surprises in all of baseball.

The Mariners were untouchable at the time. Bret Boone had a ridiculous season after knocking in 141 RBI’s and 37 HR’s , Ichiro Suzuki batted .350 and Mike Cameron delivered 25 RBI’s and 110 RBI’s. The pitching staff was impressive, led by two former Phillies: Jaime Moyer (20 wins) and Freddy Garcia (18 wins). Yet, when it came to the ALCS, their offense couldn’t produce, scoring 3 or fewer runs in all four losses.

There inability to finish the season with a World Series victory was viewed as a disappointment, despite their 116 wins.

Hagen goes on to say that if the Phillies don’t land a right-handed bat, they could wind up doing exactly what the ’01 Mariners did: finish with the best record in baseball but fall short of the World Series.

“…the Phillies have the best record in baseball. Which is fine as far as it goes,” said Hagen, “The trick is to avoid becoming the 2001 Seattle Mariners. That team, you might recall, won 116 games in the regular season even as manager Lou Piniella pleaded with the

front office to get him another bat. No help was forthcoming and the M’s won just one series in the postseason. Instead of becoming world champions, they became a footnote.”

Is it really that important for the Phillies to land a right-handed bat?

The answer, without digging too deep into statistics, seems to be no. So far, the Phillies have overcome their lack of run support to own the league’s best record. They have the best rotation in baseball, and once their disabled list starts shrinking in size, they will return to their normal selves.

But, if you do look at the numbers, Hagen does have a point. Finishing with the best record in baseball is good… for some teams. However, the Phillies have made it somewhat routine to be atop the NL East in recent seasons. After losing to the San Francisco Giants in the NLCS last season, the Phillies need to find a way to get over that hump and return to the place they were in in 2008 and 2009: the World Series.

There’s certainly options out there for the Phillies. Carlos Beltran remains an interesting topic, while Juan Rivera also could find himself in the red and white pinstripes. Others, such as Josh Willingham and Carlos Quentin, could also be on the Phils’ radar for the right price.

Whether or not they acquire a right-handed bat (although, I do feel it would do wonders if they could land someone like Beltran or Quentin), I believe the Phils will go as far as Ryan Howard, Chase Utley and Jimmy Rollins take them. They are the three leaders in this lineup. Aside from Howard, who leads the team in home runs and RBI’s, the duo of Utley and Rollins haven’t performed up their usual level this season.

If Utley and Rollins can figure things out in the second half of the season, and if Howard can keep on pace for his 30 homer, 120 RBI season, the Phillies will be fine come playoff time.