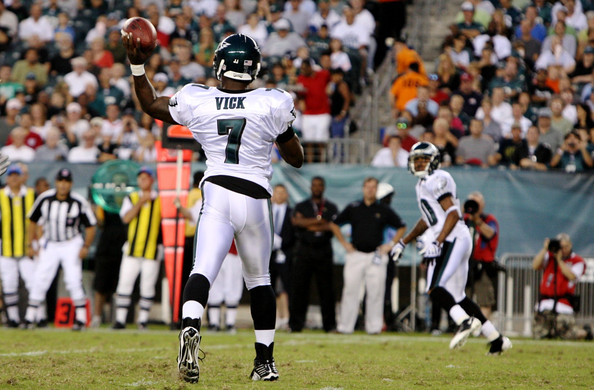 I don’t know whether former New York Giants wide receiver Plaxico Burress will ever play for the Philadelphia Eagles, but one thing is for sure, he’s got some fans on the Eagles roster.

Both Michael Vick and DeSean Jackson have been singing the praises of former Giants wide receiver Plaxico Burress the last few days. Last week Jackson shared some of his thoughts about the probability of playing with Burress.

“Plaxico Burress just came out to California, me and him just spent some time together and catching up,” Jackson told Stephen A. Smith on ESPN Radio in New York, via SportsRadioInterviews.com. “I think he would love to come play for the Eagles, come play with me and Vick. He already kind of had a connection with [Michael] Vick, with him being in prison and him kind of talking to him before. So it might be a connection, I’d love it. But regardless, I wish the best for him, and if he was to come to Philadelphia I think it would be a dangerous combination.”

Now Vick has grabbed the mic and begun to join in singing the praises of Burress. He was on The Herd with Colin Cowherd on ESPN

radio and he had plenty to say about Burress.

“I think he’s an extremely good athlete, one of the best receivers ever to play the game, tremendous size and incredible abilities to make plays at any given moment in the game. So why wouldn’t you want him as an addition on your team if you feel like he can be a leader, first and foremost, and he can help your team football team win games?”

G-Man,
What’s your thought’s about D-Jax Comments from last week…Appears to have hurt his image big time and was a pretty stupid/immature thing to say..Where’s has the local media been on this story….

Paulman, no one mentioned it because it is a non factor. The radio caller said something disrespectful to Djax and then got rightfully blasted for it . It’s a non-story. The only one hurt by it is you; let it go.

Paulman, do you think Gcobb represents the local media? It was in the dailynews/inquire, and talked about breifly – cause as Rocko said, it’s a non story.

I am not hurt by D-Jax comments or story at all Rocko,
I just find it kind of funny (selective reporting I guess) when G posts articles about real non-stories like McNabb’s annoucement on Youtube or the ridiculous story of Brett Farve being a good candidate for a back-up once Kolb is traded , but no comments about a current Eagle player (D-Jax) when they make the news and for the stupid reason… I’ve read stories about T Ownes propsed reality show, Non-Football people hosting NFL shows,etc,etc,etc.. Sounds like to me, many in the Local Media are afraid to comment or crticize D-Jax’s statements for fear that they will lose access to him when the Season starts…

Paul, if you’re ignoring my posts, than great, I’m honored. But if not, then why can’t you get it through your head that your reasoning is crap – the Philly local media covered the story. That’s a fact, so your theory is BS. I’m not faulting you for having the thoery in the first place, but it quite simply has been proven otherwise. So why are you sticking to it? I have a theory that the federal government, both sides, haven’t made mention of the debt ceiling. I also think that the media is ignoring some contract negotiations that are going on in the NFL. Why isn’t baseball playing an allstar game – it’s that time of the year?

The caller baited DJax. I had no problem with DJax ripping back at him. When is this politically correct s#!t gonna end. This is America. Go to Iraq or another middle east country, if you don’t like it.
This lockout has to end, because DJax can’t help himself & keep his mouth shut. He has too much time on his hands.

hey paulman, stop trying to make yourself into something at our teams expense, never go against the family. just shut up and do your thing goof.

Trade Kold for DRC sign Plax and lets roll…We need a big game, playoff WR and Plax fits the bill…our young dudes are nowhere to be foung in big games…Plaxico has Always been a big game WR

Any comments about B Graham’s microfracture procedure? Anybody learned anything that PFT hasn’t already posted?

Paulman, I’m with you. I also agree it was a non-story but it is funny of all the other rubbish that is “reported” on this site that has nothing to do with the Eagles or Philly sports but something like that doesn’t get a mention. So while I agree it’s a non-story but it more relevant than the other junk being reported.

Another example of Philly Media folks not having the balls to call Athletes out when it’s called upon for fear of losing access to them ..It’s happened many times over the years..The local media will call out certain players and run those stories into the ground (McNabb) but then have the hands-off approach to other local players.. (Brian Dawkins,Chris Pronger,Cliff Lee) and not cover everyone fair and sqaure…
B Graham most likley will miss the entire 2011 Season which I expected and stated on here a few times during this off-season..

ANDERSON, Graham had microfracture surgery on his knee in December, along with the torn ligament. With both of those done at once, you won’t see him until near the end of the year. He won’t be completely healthy for 2 years, maybe longer. It’s a priority, along with a RCB to sign a stud DE. Both of top 2 draft picks blew up on them, when said “WTF are they drafting Graham this high”. Bet they regret not drafting Earl Thomas now. Jacka$$e$. Also that a$$ clown DF coordinator that we had last year, should be caned for putting the kid in DT, before he got hurt. They all want to be know it alls.

Well, I am guessing that the Birds certainly knew about the procedure before it got out into the public domain. You would have to assume that it is factored into their priority list when they go free agent shopping. I’d actually rather have had the info stay in-house, now the rest of the league knows the Eagles have D-end as an item of need, as opposed to a luxury. The less people know about your business the better.

ANDERSON, everybody knew he was going be out at least half the year anyways. But I agree with you, I think they have a plan & it will be four fold first off—
Trade Kolb, Sign stud DE, DT & RCB. They are dire needs. F^@K this Burress & Bush idiotic talk.

Missing half the year was expected, but that would not have been the end of the world. J Parker is a solid half year guy, getting the youngblood back the 1st week of November would have been a nice shot of fresh legs. This revelation certainly makes it more likely that they are going after a right D end than I had previously thought.

What can you say?…Plaxico is no rocket scientist, but he catch the football, and can go up in the air to get it, he’s tall…Give him a few bucks, bring him in…Make sure he takes training in the correct handling and care of a firearm, however, so he doesn’t hurt himself again in his off time.