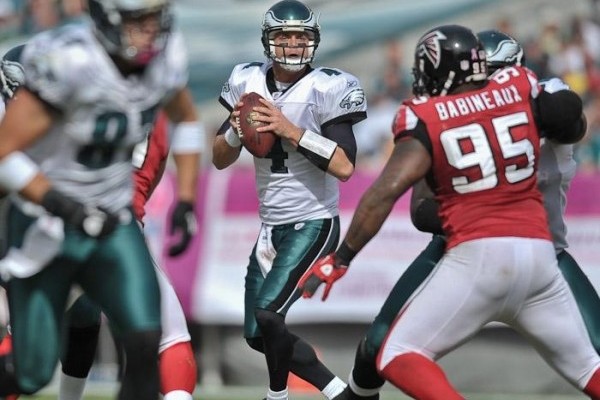 The Arizona Cardinals aren’t totally convinced that Kevin Kolb is a franchise quarterback, but they loved what they saw in some of Kolb’s videos. The Cards are sure that their Pro Bowl wide receiver Larry Fitzgerald will take a walk if they don’t get a quarterback who can get the ball to him.

They continue to watch videos of last year’s Atlanta game and marvel at the way Kolb played. He was nearly perfect in that game and was awarded the NFC Offensive Player of the Week for his efforts.

I have written in the past about an NFL source who is close to the Cardinals and told me how they were thrilled about the way Kolb led the Eagles to a win over Arizona’s division rival San Francisco 49ers. The source told me that Kurt Warner had to dragged into the Niners games because they punished him. Kolb stood in there against the pressure, battled San Francisco and came out of it with a victory

The more the Cards study Kolb, the more they’re sold on him even though they continue to admit the fact that they aren’t sure that he’s the answer. They saw Kolb panicking in the pocket when he was pressured by the Packers.

The Cardinals have also thought about the Eagles trading A.J. Feeley to the Dolphins and Donovan McNabb to the Redskins. Neither trade worked out well for the team dealing with the Eagles.

From what I have garnered, Arizona is willing to give up talented young Pro Bowl caliber cornerback Dominique Rodgers-Cromartie for Kolb. That trade would satisfy the Eagles needs at the right cornerback position, but I wouldn’t be surprised if the Eagles try to squeeze the Cardinals for more because the Birds know that they’re desperate.

Now reports and rumors have the Seattle Seahawks upping the ante and being willing to offer the Eagles a first round and a third round pick for Kolb. I don’t take that rumor seriously but I do think the Seahawks could aggressively pursue Kolb. There’s no telling where they rumor is coming from, but believe me with the lockout appearing to be nearing its end, Kolb’s stock is soaring.

If the Eagles could get the Cardinals and the Seahawks in a bidding war they might be able to get a great deal. Both teams know that if they don’t get Kolb, the other team they’ll likely be battling for the division title will have him.

How much could the Eagles squeeze out of these teams if they patiently get them in place doing battle against each other. It would be a great move which might allow them to get more in the deal than they ever dreamed.

Hit me up for the fantasy football league invite. 8 spots left.

Come on Gary, don’t give Andy & Howie any bright ideas, before they overvalue him & bid themselves out of a trade. After the lockout, trade his a$$ outta here like Viadamir, as you like to say. Get DRC & a 3rd rounder & call it a day. Then solely concentrate on the free agent frenzy.

Did you seriously disrespect Kurt Warner?

Correct me if I’m wrong… But the Eagles played in 3 NFC Championship games in the past 10 years, and the only game they won was the one where they weren’t playing against Kurt Warner, right?

Kolb does have some real value because Big Red named him the starter unlike Feeley. Hell, Kolb is who took Donovan’s job. It doesn’t mean he’s the next Tom Brady, but he was the Eagles starter until the defensive MVP of the league knocked him out. Vick played lights out, it’s not like Kolb lost his job to John Kitna. It’s a quarterback league and the much respected Andy Reid was willing to go to battle with Kolb, that says alot for Kolb.

I hope they get a player like DRC that can help this year. The Eagles have the money to sign DRC long term because he only has 1 year left on his contract. They aren’t going to break the bank on DRC or they will keep Kolb and Sign Nnamdi or another corner.

yessirr tell Andy dont get greedy and overplay his hand. Get what we need and lets keep it moving

Please no DRC. We have enough solid players on defense. We need ELITE players. Please don’t tell me that Asante Samuel is Elite. Get Nnamdi. And get a 1st and 3rd for Kolb.

Mui – we have enough sollid players on D? Really? Really? And you don’t appreciate Asante? Is it opposite day?

We have enough “solid” players on defense?? Did I miss something???

Enough is enough! Time to dead this Asomugha drama!

Asante is more elite than Nnamdi and I’ll stand by it!!
I know there are tons of you cats that run around here salivating at the possibility of getting Nnamdi…now dont get me wrong he is a good pickup, a solid cover corner, no doubt, definitely an upgrade over any CB other than Samuel…But as far as playmaking ability, Asante has him beat, HANDS DOWN!!…They both entered the league the same season I believe (2003) Nnamdi has 11 Int’s over the course of his career, Asante has 42… Asante also has more tackles and forced fumbles over the course of the career. In fact Asante played 3 less games in 2010 and still had better numbers!

A Samuel is not an “Elite” or Shutdown CB, He plays too soft down in the Red-Zone resulting in many easy TD’s by the opponents and is terrible in Run Defense. He’s the best CB the Eagles have by far, but he is not in Rivas,Asmo’s
league as far as an “Elite” CB goes in my book.. Eagles needs to counter him with a bigger,physical CB who plays tough vs the defense and plays tough in the Red-Zone which is where the Eagles Defense has it biggst problems beacuse of their “soft” Secondary of the last few seasons… I like Carlos Rogers or Ike Taylor to play opposite Samuel and then groom Lindley/Marsh as their successors down the road who can come in and play in nickle pakages as they learn and get experience

If Asante is not an elite CB, then neither is Nnamdi…(alot of his stats are masked at the fact the Raiders would get their asses handed to them and the other team would be running the ball at the start of the 4th quarter) How many games honestly have you seen Nnamdi play live? you’ll find he has his flaws too! what makes Nnamdi, an elite CB in your book, Paulman???
He covers his players well? great…does he make game changing interceptions? take them to the house? leadership? Also P – man it’s Revis not Rivas…you guys listen to the media way too much, because they say this player is the best right now, everyone tags along…I like stats, production, plays that show up on the scoreboard. Asante provides exactly that…
Now I do agree with you about acquiring a Rogers or Taylor, you are right we need a physical CB…

Send me an email Paulman so I can send you the invite. Also anyone else, want in, just hit me up astuckey at gmail dot com

Send me an email Paulman so I can send you the invite. Also anyone else, want in, just hit me up astuckey05 at gmail dot com

Sorry guys, I forgot the 05 before.

WIll do Scorp,
I will be back in the office tommorrow and will send to you..

MUIMUIMAN, come on dude, what DF did you watch last year? Other than Cole, there are no untouchables. Samuel is a ball hawk, but is overpaid, has a shitty attitude, gives up as many plays as he stops & couldn’t tackle a corpse. If I were Andy & Howie, I would trade Asante, & sign an entirely new secondary. Rebuild that DF now, & make it great.
***Also news came out today, that Graham had microfracture surgery on his knee in December, along with the torn ligament.***
So that means, like I said many times before, they have to sign a stud DE as a priority, along with a stud RCB. Graham might not be back until a few games are left. He is worthless this year, & might not ever be the same. It’s a shame, the kid had alot of promise… 🙁

B Graham will miss the enrite 2011 Season which I have been stating all off-season, It’s better for him to take the entire season off and get 100% for the next off-season and get ready for 2012 and beyond..
When a player suffers a major knee injury in December like Graham did, you can almost write off the next season as well for it takes a good 10-12-14 Months to recover,rehab from that and this off-season with the lock-out really put him behind re-habbing on his own..He will be placed on IR and ineligible for the 2011 Season and doesn’t take up a Roster spot.
Nate Allen suffered a knee injury in December as well but not as severe, I believer he will be placed on the “PUP” list and eligible to be activated around week #5/#6 of the 2011 Season, so the Safety Position is also a Question ???
Samuel is the best playmaker and CB on the EAgles Secondary and they won’t be looking to move him for it would make little sense in doing so, I do believe he has 2 more seasons left with Eagles before he realeased after the 2012 Season as youngesters Lindley & Marsh will hopefully be ready to take over.. They need a physical CB for the next 2 Seasons while the youngsters (Lindley/Marsh) learn and hone their skills. A Pysical CB like Carlos Rogers or Ike Taylor are good fits sinec they won’t be expensive and have lots of experience to pass down to the yuoung players while play a tough-nosed style of CB that the Eagles are lacking and especially in the Red-Zone which has been the Eagles Defense biggest problem the last 2 Seasons..

PAUL, nobody wants to listen to us. They just think this dude was going to miraculously heal himself & contribute this year. I said he was done for at least 10 games, before, we knew about this. But nooooo!, nitwits on here ripped me for saying they needed a stud DE. Hey, i’m not a know it all, but someone who is a knee replacement candidate in a few years, & is a vet of miniscus removal, ACL & micro fracture surgeries, I think I know a little something about it. No arguments now, heh my brothers?