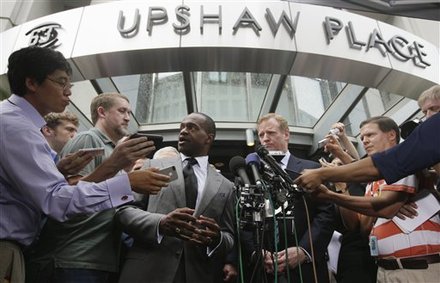 Finally!!! A new CBA deal has been agreed upon. No more talks of progress being made. No longer do we have to hear or read “An anonymous source stated a vote should be made this afternoon”.

While the NFLPA proceeds to recertify as a union to continue negotiations on issues that must be collectively bargained, the rest of us can focus on the timeline to prepare teams for the upcoming preseason games.

The Philadelphia Eagles have stated they have an aggressive game plan in place. They’re surely going to need it. There will possibly be over 500 free agents to choose from. Eleven draft picks need to be signed and in camp ASAP. The eventual trade of Kevin Kolb could mean address another position of need (Right corner).

Looking at this week’s timeline for football business, here’s how I think the Eagles order of business will proceed…..

Teams can go to a 90 man roster. According to PhiladelphiaEagles.com, the Eagles roster has 87 players listed including the 11 draftees. Because it’s still based on the 2010 roster, there should be approx 20 names with asterisks next to them.

With David Akers, Kevin Kolb, Quintin Mikell among others likely departing, I don’t think the roster will be set for the preseason until early next week.

Although teams probably have an idea of who they’re going to pursue, the official list of the 2011 unrestricted free agents has been published.

On Tuesday, July 26, 2011, facility doors will open for players. After the injunction chaos that occurred during the draft, guys will be relieved knowing that they won’t be sent away after a day.

Teams will be allowed to start signing draftees and undrafted free agents at 10am. Look for the Eagles to move fast here in order to have their rookies at Lehigh University on Wednesday.

What stands out for the Eagles and Tuesday morning is that trades will be permitted. We should finally know the truth about what Kevin Kolb will be worth. It should also set the tone for the rest of the Eagles plans.

Negotiations with pending free agents can begin tomorrow, but deals won’t be able signed until Friday evening. We’ll find out who the Eagles have been coveting very quickly.

Rumors have circulated that the Eagles are interested in Minnesota defensive end Ray Edwards and the annually retired Brett Favre. I’m okay with the former and pray the latter was strictly media hype.

Thursday, at 4:01pm, teams will be allowed to release players currently under contract. Depending on Philly’s plans in free agency, a few cuts may be made to add to their approx $23 million in cap space.

Juqua Parker, Mike Patterson and Joselio Hanson are three guys who may be considered overpriced. The trio would free up a combined $6 million in cap space. If that helps replace them with Edwards, Albert Haynesworth and Dominique Rodgers-Cromartie, I’m all for it.

The most important thing is: Soon these speculations and rumors will turn into reality and the game we love will have our attention this fall.