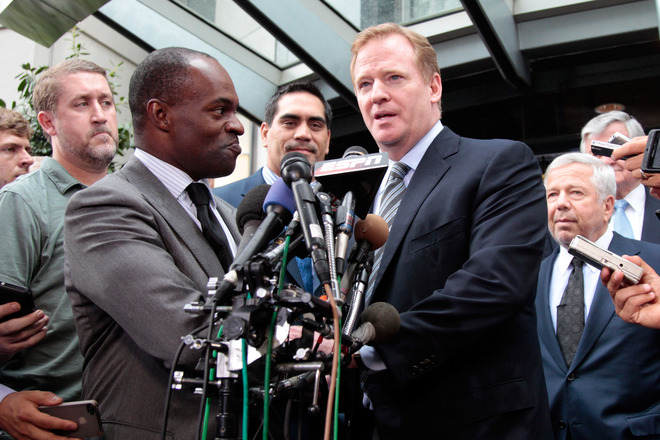 July 25–You would expect that any statement about an end to this current lockout to be made with some trepidation, considering the whole “Ownership betrayed us” tirade that the players went on last Friday.

And it is indeed that same tirade has seen negotiations stall to this point, this being day 132 of the NFL lockout.

However, you can through all of that out the window today, as a certain end to the current labor dispute will come today with wide spread reports claiming that the owners and players have an agreement in place, with the league year expected to begin tomorrow

So what does this mean? Well let’s just water this down to the basics.

According to a report on ESPN.com, here are the perimeters of the tentative agreement.

Teams will be able to have 90-man rosters this season, while free-agency begins tomorrow without the previously expected 3-day exclusivity period for teams to re-sign their own free agents.

There is also a $120 million salary cap for the upcoming year, while transactions can be filed to the NFL by 6pm on Friday.

Teams will reports to training camp by tens starting Wednesday, with two remaining teams, the Texans and Jets, the last to come in on Sunday.

While such stipulations seem to be fixed right now, and the NFL is in the clear to officially resume business, make no mistake, there is still work to be done.

Although the players and owners have (apparently) come to a settlement, there is not a new collective bargaining agreement in place.

A new CBA will be worked on as soon as the playes re-certify as a union, which disbanded at the start of the lockout so that players could filed an antitrust lawsuit against the NFL, according to an article in the Pittsburgh Post-Gazette.

However, this will serve as no stumbling block and fans should be able to keep their expectations of the league year beginning tomorrow.

So you can breathe easy, prepare for a chaotic preseason, and get your Fantasy Football ideas ready, because the NFL, for once and for all, is finally back.