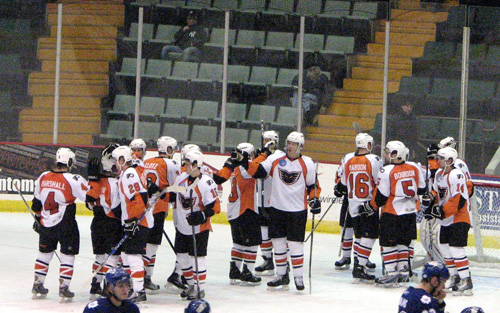 With NFL free agency taking center stage, there isn’t much to discuss on the Flyers’ end unless you want to debate exactly how many drugs Mike Richards took during his tenure as Captain. I’d prefer not to add to the subject because, in my opinion, nobody will ever truly know how his lifestyle choices affected the team so debating what effect one thinks it had is moot.

Richards, via twitter, said it best:  “The last three days, all I talked about was my past in Philly, and not once was there a positive thing said. Everything was about off ice junk. Not the way I wanted to be remembered but it is what it is and time to move forward.”

Keeping with the theme of moving forward, there were two minor league announcements this week that affect the prospect end of the organization.

On Tuesday, the Adirondack Phantoms announced that they re-signed forward Denis Hamel to an AHL contract. Hamel was brought on board last season when the Phantoms were at the bottom of the rankings after a horrible start and provided much needed veteran leadership to a very young group of players. Hamels, a former AHL all star, played with Mike Testwuide and Eric Wellwood for much of the season and should have a positive effect on their continued development.

Earlier today, the Trenton Titans announced that they will be the new ECHL affiliate for the Flyers. The Titans were affiliated with the New Jersey Devils over the last four years and were part of an effort by that organization to recapture the South Jersey market.  The team struggled to fill seats, though, leading one to wonder if being re-affiliated with the Flyers will boost revenue. Considering all the upheaval and recent player movement, there may be more interest to see the prospects in action early.

For all the latest Flyers news and updates, you can follow me on twitter (@JoshJanet). Updates may be fewer and further between until September, but if it affects the future of the orange and black, you will find it here.

Roy Oswalt’s Impact On Phillies Down The Stretch