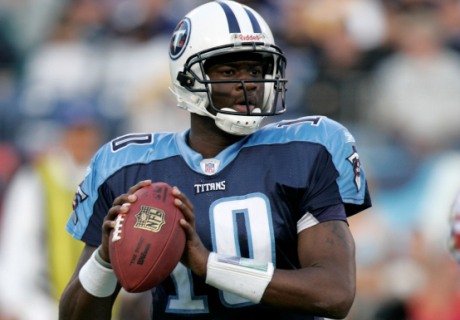 For all intents and purposes, the Philadelphia Eagles have completed a one-year deal with former Tennessee Titans quarterback Vince Young, but they’ll have to wait to make that announcement in the near future.

I’m concerned about both defensive end Brandon Graham and offensive tackle Winston Justice. We didn’t find out that Graham had microfracture surgery until recently. Originally when Justice had his surgery, we heard that it wasn’t a big deal, but we have learned since then that his surgery was much more serious than we realized.

He and Justice have been put on the PUP list, which is short for the Physically Unable to Perform list. Juqua Parker is starting at the left defensive end position and King Dunlap is starting at the right tackle spot at the moment.

Former Eagles fullback Leonard Weaver said that he hadn’t be informed about being released from the team before being contacted by a Comcast Sportsnet’s Derrick Gunn, but the Eagles say Weaver had indeed been contacted by two employees of the Eagles to let him know he had been released.

An earlier article here on GCobb.com had reported Weaver’s claim, now we see that the Eagles contend that his statement on Twitter wasn’t true.

Michael Vick Is Getting A Lot Of Training Camp