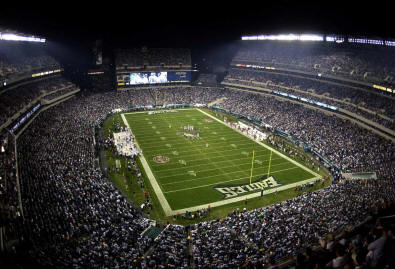 I know the Phillies have an outstanding baseball team, which has the best record in all of baseball and could be on the way to another World Series title, but the Eagles may still own Philadelphia.

The Birds put single-game tickets on sale this morning at 10am and sold them out in less than hour.

“We’re happy to see the demand for Eagles football is healthy and strong,” team president Joe Banner said. “Season ticket renewals, waiting list applications and single game sales show that Philly fans are ready for some football. And we’re highly motivated to deliver our fans a great season on the field.”

@Birdo, Indeed…all of the fake ass Eagles fans are coming out the wood work ..

Honestly… there are probably double even triple the amount of fake phillies fans than there are fake eagles fan, and EVERY YEAR they sell out in like an hour… every single year. So I dont know why this year it would be any different?

A couple of years ago the NFL had to extend a game deadline so Arizona could sell out their play-off tickets. Their team makes the play-offs and they don’t even buy the tickets.

Those are fake fans.

As long as the Eagles are concerned, if your money is real and you are willing to spend it on them in this difficult economy. You are a real fan.

Everybody has different levels of faith for this organization and team. But not all are a fanatic – which is what the term fan is short for.

The fact that it has taken the Organization this long to be ALL IN, when the fans of Philadelphia have been ALL – IN for decades with support for this team and organization.

well said bsm, well said, we have been all in for decades, finally, finally, the eagles’ organization is all in, I still can’t believe it sometimes

Zoltek and BSM, I hear and understand exactly where you are coming from…Eagles are a successful organization with a lot of fans and have always had strong fan support…I know this!

While the Organization may not have been “all in” as you state it…Fan’s like myself have…Even if your organization does not go “All in” or do what you think they should during the off season, if you stop supporting them and then come back because they are doing different things, you are a fake fan! Some reasons, may be they didn’t have aggressive offseasons, never won SB, don’t like Coach Reid, dont like management, maybe even stop supporting the Eagles when Mike Vick was signed…I bet many of those fans bought tickets now that the Eagles are being talked about as one of the best teams for the upcoming season…

Fellas my comment was written intentionally as generic as it could be…Regardless of what you say, you can not tell me that there are not band wagon fans that bought tickets to see the Eagles play in 2011 (there’s really noway to calculate it, but its a safe bet)…its that simple…and if you’re not one of them, then why do you care?

couldn’t have said it better bsm

Heard Malin reported to camp…any news on whether he’s practicing?

No word on Maclin,
Probably having his physical,paperwork and getting thouroughly checked by the Medical Staff.. I would be very suprised to see him out there practcing before this weekend maybe some walk-thrus, formation,film, playbook stuff

Saw a report that Maclin will be on the field tomorrow.

Vikings released OT Bryant McKinnie today who has been sort of an enigma for them, he has a lot of talent, but a questionable work ethic and has some off the field issues… Talented player when focused .. Eagles may took a look,talk to him to see what his situation is and could possibly play RT.. He was an All-Pro a couple of times only a couple of seasons back ..

Yup paulman i confirmed he was released…

Jon – Thanks, I tried really hard to comfirm he was released but I could only make it as far as http://www.profootballtalk.co

That last ‘m’ was just too much to ask for. Good thing we have an insider like you. I don’t know what we’d do otherwsie!

The eagles planned this perfectly, go signing crazy then open up sales for single game tickets! hahaha im not mad that they went crazy in free agency but it gets me how they are… so funny.. very calculating, but smart i must admit…

How is this a surprize? All the bandwagon jumpers are back.