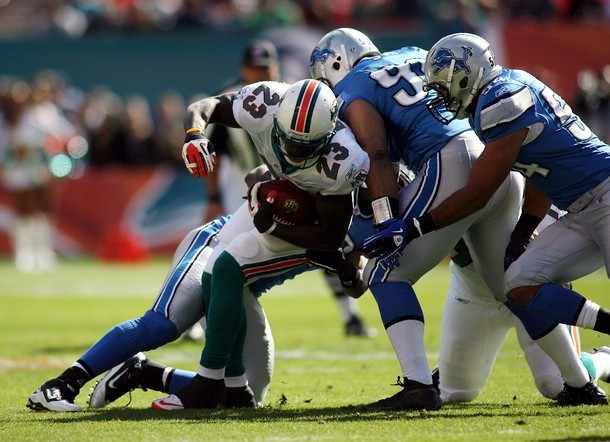 The Eagles have signed former Miami Dolphins running back Ronnie Brown to a one-year contract. He’s expected to come in and backup the Birds starting running back, LeSean McCoy.

Brown was previously the second pick in the draft in 2005. He’s had some good years but he hasn’t been able to stay healthy. He has missed some time due to injury, but he proven to be a talented and productive player when on the field.

“Ronnie is an all-around running back with a versatile skill set,” said Eagles general manager Howie Roseman. “He can run the ball, catch it, and does very well in pass protection. He’ll add some good size to our backfield and he’s a good character guy. We think he’ll be a tremendous compliment to LeSean [McCoy] and the other young backs on this team that we really like. You can never have enough good running backs in this league and we are happy to have Ronnie join us.”

In 2008, Brown was elected to the Pro Bowl after rushing 214 times for 916 yards and a career-high 10 touchdowns, while grabbing 33 receptions. That year, he played a vital role in the Dolphins “Wildcat” offensive packages and even completed two of three pass attempts for 41 yards and a touchdown. He was also voted by his teammates as the Ed Block Courage Award recipient as he valiantly rebounded from an torn ACL injury during the 2007 campaign. Brown logged a career-high 1,008 rushing yards in 2006 after leading the Dolphins with 907 yards rushing as a rookie in 2005.