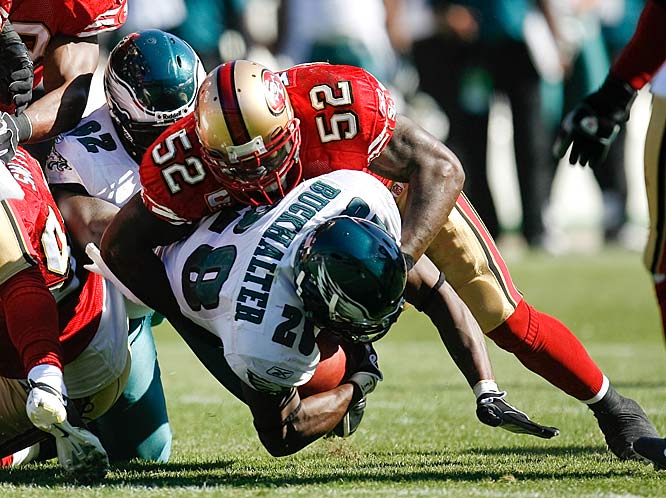 “For the geniuses who continue to ask about Willis to the Eagles. Are you serious? Willis is arguably the best LB in the NFL.” Adam Caplan tweeted.

“I don’t throw trade names on Twitter until I know there might be some validity. So stop hyperventilating. No Asante deal imminent, I’m told.” Les Bowen tweeted.

As of late Tuesday night, Adam Schefter who seems to break all the major stories surrounding the NFL 2011 off-season has zero tweets on the issue.

The original tweet reads: “Eagles in discussion to move Asante Samuel to 49ers in return for Patrick Willis.”

Other informative “DMV Followers” tweets include, “Maryland is the 18th best party school”, “The Eagles are the NFL’s Miami Heat”, and “Where’s the people at that have AT&T”

So, as awesome as it would be for the Eagles to acquire Patrick Willis, it looks like this rumor will be stored in the BS section of the rumor mill right next to the Brett Favre backing up Michael Vick rumor.

Trading Asante only weakens us.

Keep all 3 of them and rotate them.

With Nmadi,Samuel, Cromartie it should give our linebackers a second or two more to pressure the qb.

I think Jenkins will create alot more pressure and our blitz should be effective.

We need to keep Asante…..With the talent on the corners this will give im more freedom to rome around the secondary and jump routes with minimal risk..He will get the numbers and his value will be there if we want to trade him next offseason..But, let’s get that trophy first. We can make room salary wise when Vick’s contract is done with a big signing bonus and a modest salary against the cap this year.

As much as I like Willis, I believe that Assante staying is better for the team.

That being said, if we are looking at playing alot of nickle and dime coverages because of our 3 all-pro CB’s, then we need to understand that teams will try and run at us. A big, solid veteran LB is something that we should be looking to add from the cutdown lists in s few weeks.

Stop believing everything you hear guys… ive been telling you that Asante isnt going anywhere, he ll be an eagle by the end of the season…

I wish Mccoy and Osi didnt have beef with each other cause if they didnt I would trade that 2nd pick to the Giants for Osi.. Like trading Kolb for Osi Umenyora and DRC. Problem is Osi wants big bucks which stats show he deserves it.

Patrick Willis is not going anywhere so don’t get your hopes up. I think we’re rolling with Chaney and Mathews.

GUYS, PATTERSON IS AT PRACTICE JUST WENT DOWN HAVING CONVULSIONS, AMBULANCE HASNT COME YET… LAWS WAS CARTED OFF WE THINK IT WAS HIS KNEE… THIS IS NOT GOOD GUYS!!!

Greenfan, the line up front is going to be pretty strong too…I think we have enough talent surrounding the LB core, that we’ll be aight…The way people are talking about Casey, he may be very solid…Chaney we all know is solid too. your right though adding some talent at the LB won’t hurt

NO PATTERSON, HES BEING PUT INTO AMBULANCE NOW, HE HAS MOVEMENT IN ARMS AND LEGS WHICH IS GOOD… BUT THAT WAS SCARY… THEY MAY HAVE TO SIGN ANOTHER DT OR 2 NOW

@ real….true, our DL is pretty strong (hopefully nothing serious with J Harts post above), and with Washburn kicking their asses, should be a solid group that will help LB’s play better. I liked Chaney’s play last year too, but Matthews being a rookie is a big question mark.

Side Note, Adam Schefter reporting: ITS TO THE POINT NOW WHERE THE REMAINING FREE AGENTS WANT TO GO TO PHILADELPHIA– AND ARE WILLING TO TAKE LESS MONEY TO DO IT…

OMG guys i hope this never ends! Maybe the birds will sign Braylon Edwards and Kirk Morrison next…

Looks like both Jon Hart and I are listening to 97.5 FM, thanks, Jon but my ears work just fine…lol

Is Desean at practice today? What about Maclin?

read that 1st round pick Watkins ( former firefighter) help attend to Patterson when he suffered his seizure.

wasssup, actually im not listening to it dumb dumb i reported it a long time ago… dont hate

A huge Pipe dream for getting LB WIllis..
He’s the 49ers Franchise palyer on Defense who signed a huge long-term COntract extension before the NFL Lockout in the SPring.. Why would the 49ers trade him..You guys are getting ridiculous

REPORT, EAGLES MADE A POST RETIREMENT OFFER TO MOSS

Moss may be an eagle sometime this year…

Jon- You must constantly hit refresh on the Rotoworld website to do your “reporting” because I see them there and 2 minutes later you’ve posted here.

I have sources bro… No rotoworld at all

Well your source uses Roto and/or PFT to pass info on to you. Not that I mind…it keeps me from having to check the other sites too!!!

Jon- waiting on your Mike Patterson update- it’s been posted so you should be passing it along soon. 🙂

Eagle eyes, you obviously hate that my reports come in really fast way before the sites get it… dont hate, n if you didnt care you wouldnt have said anything… so you can SMD!

Dude I already said it’s reported on another site and then 2 minutes later you post it. I don’t hate it…just connecting the dots.

Oh wipe your eyes… You can try and be an investigator all you want matlock, but my sources are league affiliated… your sucha little hater… go back to the hole you came from.. my reports will keep coming now that you ran your mouth trying to discredit me… SMD loser

For the record and if anyone cares,
Paulman is not one of Jon Hart’s Sources.. He’s way too cheap and doesn’t pay his bills on time and also has a bad taste in women…
No back to Football ..

Thanks for showing us your true character Jon. I can tell you’re a real quality person. I was simply making a comment and you took it way to personal.

How does finding the same information on other sites discredit you??? It’s the same info…so if anyhting it supports what you’ve said.

Us who? Im talking to you “eagle eyes”.. dont try to involve everyone else, you hater.. tryna discredit me… so yes you can SMD

Jon, you dont know anything, you are listening to the radio and posting it as if you broke the story? Did adam shefter call you n say that..no…YOU HEARD IT REPLAYED ON BALDY AND MAYES AND POSTED IT HERE A MINUTE LATER…FRAUD!

Who in the world is baldy and mayes???… you guys are so worried about my sources hahaha

paulmans sources are the voices in his head.

Jon- Just because you are talking directly to me doesn’t mean that everyone else on this sight can’t read what you write. That’s what I mean by “us”….everyone else that reads what you say.

Once again- How does finding the same information on other sites discredit you??? It’s the same info…so if anyhting it supports what you’ve said.

You’re so paranoid about how everyone perceives you when in reality we all know where you get your insider info…the same place we all do. Nothing you’ve said or “broke” hasn’t already been posted elsewhere. Get off my sack about discrediting you and making references to things I don’t do with other dudes.

Jon, what I think you don’t get is that even if you’re 100% honest and actually work for the team or are close with someone that does – and you get access to the info a minute or two ahead of the major leaks/press releases – well, we don’t really care about a minute or two. We (the general fan public) have access to breaking news ALL THE TIME. If we hear it a minute before – to us? BIG WHOOP. Nobody cares. For your ego – HUGE HUGE HUGE – but we don’t care about your ego. We really don’t. I wish you well in life and your Eagles fandom, but nobody cares if you ‘break’ news a minute before we get it anyway.

SERIOUSLY – find something else to do or just react to the news like the rest of us.