Phillies Are Making Progress With Pence 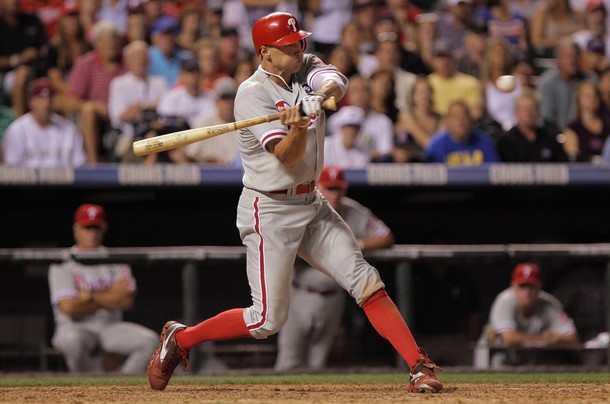 The Phillies were targeting Hunter Pence at the MLB trade deadline and they got their man. Pence thus far in his 7 games in red and white pin stripes has made an immediate impact and he looks to be the solution for the righthanded bat that the Phils desperately needed in their heavy lefthanded lineup.

The Phillies have yet to lose a game with Pence on the squad. They’re 7-0 with the win last night over the Giants.

They are 11-3, in the past 14 games as they endure a stretch where they play 20 games in 20 days. Pence has bolstered the middle of the Phils lineup and has finally returned it to death row for pitchers as it once was in the 2008 and 2009 World Series seasons with Jayson Werth and Pat Burrell batting fifth. Before the acquisition of Pence, Phillies rightfielders were hitting only .238 so the addition of Pence’s .300 plus average has put pop back in the middle of the line up.

While the former Astro’s numbers have been good since joining the club, perhaps his biggest contribution has been protecting the guy who hits directly in front and getting on base for the guy who hits behind him. Ryan Howard and Raul Ibanez have been both swinging the bats very well of later.

Howard, the National League RBI leader with 67, hit his first home run off a left-handed pitcher since September 8th of 2010, snapping a streak of 154 at bats against lefties. Howard usually starts hitting better after the All-Star break, and now that he is seeing more fast balls and opposing pitchers will definitely have their hands full from now on.

Ibanez in the past week has hit .292 with 6 RBI’s and 3 runs scored. His week featured a game in which he pretty much single-handedly completed a sweep of the Pittsburgh Pirates. Ibanez had his best statistical month in July and if Pence can keep consistently getting on base hopefully Ibanez can keep knocking him in.

The Phillies currently hold an 8.5 game lead on the Atlanta Braves in the East and it appears that they will have the National League’s best record by quite a bit. I don’t think there is any team in the National League that will come within 7 games of them. The Phillies still have 51 regular season games left, including 6 against the Braves. If the Phils continue to play the way they have been, the

remaining 51 games could be rendered as nothing more than warm up games for the playoffs.

All Pence really has to do is keep playing his role by bringing his constant energy, .300 batting average and keep the Big Piece stroking fastballs. If every stays the way it is now, the Phightins should be able to coast right into the playoffs.

The talented rightfielder has been handed the one of the most important roles in the Phillies offense and that is protecting the team’s best offensive weapon. Pence thus far has answered the call in protecting number 6 and has simply made the best team in baseball better. He will be a key weapon in the Phillies offense during the postseason and hopefully he can continue to be productive.