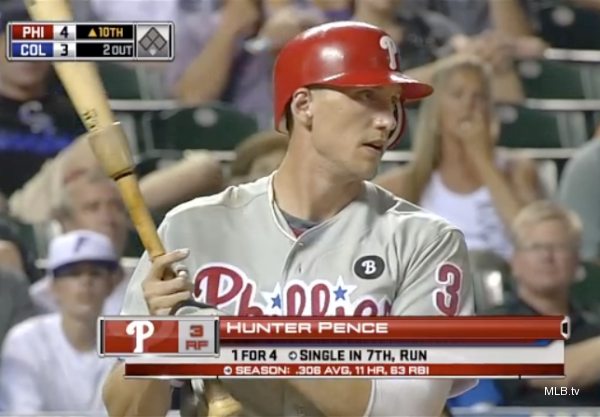 The afternoon he was told that the Astros were close to closing a deal which would ship him out of Houston, Hunter Pence made it very clear he wanted to go to Philadelphia. He had to wait two days for the deal to go through, but once it did, the outfielder could finally breathe a sigh of relief and do his first interview as a Phillie.

He had the media eating out of his hands as soon as the slugger’s scratchy voice could be hard by Phillies fans. With the entire city of Philadelphia listening, the new star smirked and said, “It’s the city of brotherly love, I can’t wait to get there, man.” The newly-acquired bat has by no means had a “normal” journey to Citizens Bank Park. From Yahoo! Sports to “Jim Rome is Burning”, Pence’s antics have been at the center of conversation.

The rifle-armed outfielder hustled to Philadelphia but began his career wearing red in an unusual way. When he took the plate for the first time, he did so while wearing his black Astros’ cleats, which had been changed to read with spray paint. Despite being the least fashionable one on the field, the Texan doubled in a run for his first hit and RBI in Philly red. Little did we know that his make-shift cleats were just the beginning of a media frenzy that would go on because of the right fielder’s tomfoolery.

Just days after landing in Philly, the jet-lagged star changed his Twitter picture to the Daily News’ front page, titled “Pencey Driver.” The clip-out showed the outspoken star scoring the game winning run on a Raul Ibanez double. The internet so was abuzz with the picture that it drew some media attention.

Pence gave reporters another reason to talk about something other than his “Praying Mantis” swing. On Monday night, the twenty-eight-year-old had a miscue at the dish. He walked into the batter’s box with a donut on his bat and was oblivious to the situation until teammates yelled from the dugout. After smirking at Charlie Manuel, Pence took off the 12 ounce donut and stepped into face a 97-mile-per hour fastball without the extra weight.

Not only does the All-Star outfielder provide character that appeals to the media, he is also the type of player that manager’s dream of having. Although looking about as out-there as his personality, the slugger’s unique swing works. The last reason the media loves this guy is the same reason Charlie Manuel does, he helps the team win.

Pence has quickly brought production to Manuel’s lineup with three doubles and as many RBIs since putting on red stripes. The real

effect of the former ‘Stro is shown by the significant increase in Ryan Howard’s stats, the results were immediate. During the five-tool player’s debut, the first baseman went four-for-four with nine RBIs. In the past five games, the Phil’s cleanup hitter has been seeing more fastball than when Ibanez batted behind him and has been on a tear with twenty-five RBIs and four long balls.

Pence was the biggest move of the deadline, and rightfully so. The star brings stability and power to an already dangerous Phillies’ lineup, while keeping the media entertained. Manuel can put the Phils in cruise control because with the chemistry this team is already developing, the next stop is the post-season.

Phillies Are Making Progress With Pence

DDCar and I stated 2 months ago that Hunter Pence would be a perfect fit for this Phillies club not only as a Right-Handed batter RF who is fundamentally sound in all areas of the of game and a perfect #5 Batter behind Howard, but we liked his attitude,his old-school baseball mentality, that fits very well with Managers Charlie Manuel’s teams.. I really thought he would become a fan favorite quickly due to his personality, his energy level and his overall likability to go along with his playing ability.. This was the best all-around player out there and is probably the only real player that really fills the Phils needs as they continue their unprecedented Season and march to the playoffs…
I have been critical of this Phillie Batting Line-up and OF all season and now with the addition of Pence, they have righted the one weakness they had and on top os all this, they really gave away very little to obtain him..Pence is 27/28 and under contract for the next year or 2 under his current deal, It would be smart for the Philes this off-season to lock him up for a long-term deal once they make their Roster decisions in the off-seasons and have cleared the books of some $$.. An OF of Pence,Victorino and Brown/Mayberry Jr for the Phil’s future looks very good ..

I am upping my Prediction for Phils to finish in 1st Place in the NL East (and overall in MLB) with approx 104 wins… Go Phils…
The Braves are finished and without Catcher B McCann they have almost zero chance of cathing the Phils (Though Uggla has finally gotten hot)
The Brewers/CArdinals/SF Giants are the PHils top Competition and all have weaknesses but all will be tough teams in a short series where you never know who steps up, who disappoints, who gets hurt, etc,etc…

not so fast paulman, pence is one player, he doesn’t pitch, this phils line up even without pence was on pace to 100+ wins, hitting was coming around in July without pence, pitching was/is phenomenal, nothing to do with pence

Pence will not be your life raft from your ridiculous, “hating” prediction that phils win 92 games, second behind your braves, that the bull pen stunk, that the hitters are “phillies lite”‘ your braves are 81/2 out in early august, remember a while back you annoyed us when the braves were still in it, you said things like “hear the tomahawk chop”‘ sorry paulman, no room for you on this ride, pick a better horse next year

paul don’t be so quick to lump your self w/DD… he thinks ibanez stinks and that howard is over rated and that the phils should not sign #11. all of those are obviously ridiculous statements.
Pence is another great trade by RA. He truly balances the lineup, is a philly kind of guy because he’s sincere, stubborn and most of all TALENTED! He is a championship kinda guy

This guy is awesome. He is a live wire and just what the Phils needed.

Easy Jake,
If anyone of you said or thought back in March that the Phils Bullpen would be this good and consistent with Stutes,Bastardo and Madson leading the way and without much playing time from the injured Lidge/Contreras is a liar…The Bullpen has performed much better than anyone has expected plain and simple and has actually been a real of strength of the Phis Club which no one really expected or saw coming…..
To Have a Cigar,
You are right, I don’t agree with DDCar on many things, I said if Ibanez can hit .250 and have 15-20 HR’s and 60-70RBI’s, I would consider that a pretty good season and now after a very slow start, he has a real shot at 20 + HR’s and more importantly, 80-85 RBI’s and has had a bunch of late game importatnt at-bats to win games..
Howard is not over-rated in my book, (he may be a bit overpaid) but he is what he is, a bigg-time run producer, give me a player who will hit 35 HR’s + and drive in 125 RBI’s every season and I want that guy on my team…
Now with the #5 Hole solidified with Pence, and a heatlhy return of Utley, now the Phils middle of the line-up with Utley,Howard, Pence and Ibanez rivals any in all of MLB and of the Phils past teams.. and as long as Rollins/Victorino are getting on base consistently,then their Offense is fine

How about the recent Pitching Performances of both Worley and Kendrick
You have to think these young guys watching,sponging,learning off a real Pro’s like Halladay,Lee and Hamels has improved their mental approach to their Games…

Pence style more than anything has energized this team. But lets not overlook another reason why this team is playing better. You got rid of that stff D Brown, who not only couldnt hit he wasnt even a major league outfielder. The emergence of John Mayberry Jr and his precense from the right side of the plate has also energized this team. ANYTIME a left hander is on the mound Mayberry should be in the lineup, period. Ibanez or Howard should be off. I understand that Howard will play its just the way it is but honestly Mayberry is a force right now.

Dag called for Mayberry
Jr. A while back. Jake agreed. Not everyone wrong about phils like paulman

Paulman, leave the predictions to me. I have correctly predicted that the Eagles would go OG first pick, would sign Asomogha, and that the phils would win 106 games atleast (prior to the season).

Keep em coming with the scouting reports and info about players though. You have some good info there.

Good stuff guys.. and Mayberry Jr has been another big reason of the surge in the Phils offense.(as has Ibanez) I will now go back into my basement and start working on next years NFL Draft…