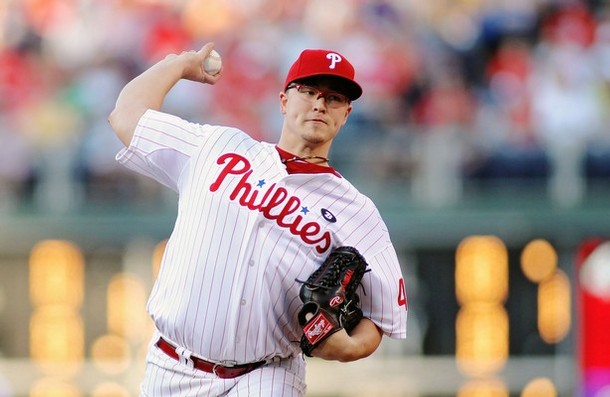 The Phillies won their eighth game in a row on Friday night, pounding the Giants by a score of 9-2. The big story from this game was the fight that broke out in the top of the sixth inning, which was sparked by San Francisco reliever Ramon Ramirez hitting Shane Victorino with a pitch. Lost in the drama of the bench-clearing brawl in Friday’s victory over the Giants was the latest performance of starter Vance Worley.

This game represented an interesting challenge for Worley. The young starter has enjoyed great success this season, but this was the second time that he had faced the Giants in a week. While the right-hander has been remarkably effective against each team he has faced, this would be one of the first times that a team had gotten a second chance to face him. After seeing Worley throw a complete game against them last Wednesday, the Giants hitters would have an opportunity to adjust to the 23-year old’s approach.

Worley was also coming off of a subpar start against the Pirates. During that start, he lasted only six innings and gave up four runs. How would the right-hander respond after a rough outing? Would he be able to rebound and get back on track?

Worley was indeed able to pick himself back up. He allowed the Giants to take an early lead by giving up a run in the first inning, but he didn’t allow himself to be rattled by the early adversity. He kept his composure, and only allowed one more run in his final six innings of work. He allowed seven hits on the night, struck out six, and only gave up one walk, earning his eighth win of the season.

Worley pitched his way out of trouble on several occasions. In the first inning, he gave up a walk to Jeff Keppinger, and then a base-hit to Carlos Beltran. With runners at first and third with one out, it could have been the recipe for a rough inning for the Phillies starter. However, he went into damage control mode, trading a run for an out by getting Pablo Sandoval to fly out to centerfield. He then got Aubrey Huff to ground out to end the early threat.

In the fifth inning, Worley began the inning by giving up a solo homerun to Eli Whiteside and a then a double to Aaron Rowand. Like the first inning, this had the early makings of a tough inning for the right-hander. But once again, Worley was able to overcome the challenge in front of him, retiring the next three batters he faced, stranding Rowand at third, and crushing any thoughts the Giants were having of a rally.

Worley finished his final two innings by taking down six of the final seven batters he faced. It was an encouraging performance by the surprising right-hander, who has now taken the next step towards proving his legitimacy as a major league starter.