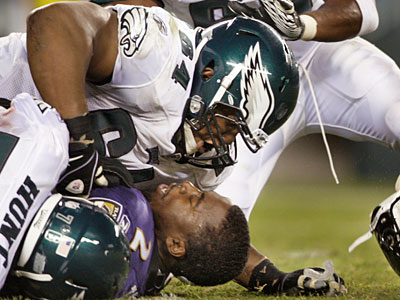 Eagles offensive tackle Ryan Harris couldn’t practice today because of back spasms. It was starting to look last year’s starting right tackle Winston Justice was going to be put on the bench permanently, this factor about Harris’ back has now appeared and it’s probably going to keep the door open for Justice.

Today we found that not only was Harris having back spasms today, he’s had surgery on his back. The medical community has mastered the art of doing surgery on knees, but they haven’t mastered surgeries on the back. Many times guys who have back surgery are never right again.

“He’s had work done on his back before, and so we’re just going to make sure we check this thing out and just that it’s right,” Reid said. “Right now it looks like it’s not too serious.”

Remember Shawn Andrews. The fact that Harris has had surgery on his back makes him a question mark to me.

Center Jamaal Jackson was also kept out of action today because of a sore knee. Jackson is recovering from off season microfracture surgery. Rookie Jason Kelce took all of the snaps at the number one center spot and seem to struggle today. There were a number of times where the entire line was moving but Kelce hadn’t snapped the ball.

Eagles defensive tackle Mike Patterson was back on the field today for the morning workout. He spent the session going through conditioning drills with other player who were coming back from injuries. Reid believes Patterson will need about a week to get himself in shape to practice.