Mike Patterson Is All Set To Return To Action Tomorrow Night 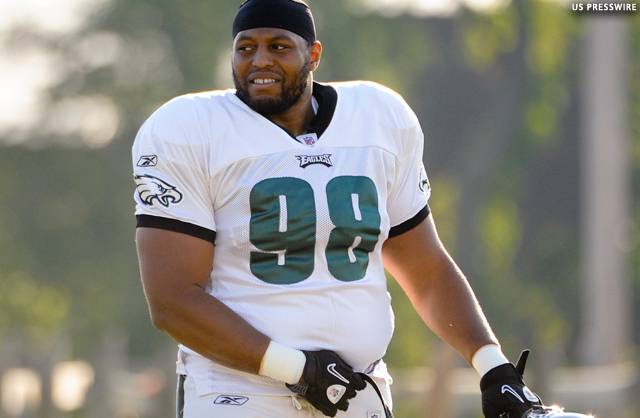 Eagles defensive tackle Mike Patterson will be back in action on Thursday after a long stint on the sidelines. It’s not easy to get your mind off of the convulsions he went through during the five-minute seizure he had at training camp. It’s amazing that he’s ready and willing to play again.

Patterson will be beating his head up against opponents while knowing that he has an abnormal connection between veins and arteries in his brain. Yes, he’s taking medication for it and the doctors say there’s little chance of that happening again, but having that ailment whiling bashing your head against 350-pound men doesn’t make sense to me. The blood flow halted for a few seconds at training camp and sent him into those convulsions.

If I were in that position, I wouldn’t be playing any more football, but Patterson is eager and thrilled to be back in action tomorrow night.

Head coach Andy Reid is going to being him back slowly. “He was out 18 days or so, and he’s been back for the four here,” said Reid. “He kept himself in good shape. We’ll treat him like it’s the first preseason game that he’s played. A little bit like I did with DeSean (Jackson) last week. Just limit his reps and see how he’s doing. Communicate with him during the game, see how he’s feeling.”

Patterson will have no problem getting the ailment off of his mind when he starts playing the game.

“That’s the good thing about football, it’s easy to zone everything out and just go out there and play,” he said. Mike won’t be thinking about AVM and convulsions but I will when he goes into the lineup.

All of Patterson’s teammates expressed delight at having him on the field again. “It’s great to have Mike back,” said Michael Vick. “You know, everybody is ecstatic to have him back and we’re excited to get him back out on the field. And I know he feels the same way and like I said, that instant brought us closer together as a team.”

If I were his teammates I would be thinking about that seizure at training camp.

Chaney And Coleman Want Better Game From Defense Vs. Browns

I hate to say it but it does not matter if Patterson plays or not. He is not a differeence maker. He is a great teamate and competitor, but not going to help us more in anyway than what we currently have out there. Dixon and Jenkins are our two best DT’s with Hargrove then Patterson and Laws are a tie. So maybe we should cut him and free up some money…..

Patterson hasn’t had any chance (actual games) to show anything in the new scheme. He may prove to be more effective than paired with Bunkley. Hargrove and Landri have also played effectively. Laws has no chance if he can’t get on field. It appears that Dixon, Jenkins, Patterson, Hargrove and Landri will be the 5 DT’s. Haven’t heard any positives about Favorite or Thornton.

Godson, I agree 100%. This is a big mistake on both sides. The Birds & Patterson’s. He has been a mediocre player & disappointment. So what exactly are the Birds gaining out this giant risk. Make no mistake about it, it is a giant risk. He is gambling with possible brain damage & death here. Not very bright on both parts. I just don’t get it. He’s a nice guy & all, but this is just stupid to me. Go live your life while you can. It’s too short to make such a risky move with your health, with all the head contact.

To Iggles,
I think Thornton will get some snaps tonight and played very well last week vs the Steelers back-ups.. I agree that Laws is the biggest disspointment this camp and unable to get and stay onto the field which means he will most liklely not make the final cut..
Patterson should get his Surgery as soon as possible and forget about playing football in the short-term, I know no one can force him to but If I were te Eagles I Iwould place on PUP and make it known that they don’t want to take any chances for him to have a setback or something bad were to happen again, then everyone will blame the Eagles for forcing him back too soon and possibly contrbuting to another seizure,head injury,etc,etc.. Why even take that chance for Patterson and the Eagles.. Go have the Surgery now and worry about Football next year…