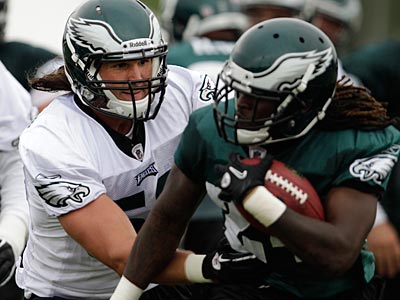 Just like Eagles quarterback Michael Vick has expressed urgency about wanting to play well on Thursday night against Browns, the Birds defense is in the same boat. Defensive coordinator Juan Castillo needs his group to show up and play much better than they did against the Steelers. I expect the Birds to game plan for this game for Cleveland’s personnel and strategies in order to insure a better performance.

Rookie middle linebacker Casey Matthews feels the Birds defense have practiced much better the last few days. “We definitely noticed it this week. I think we’ve made more strides than in the other two, of just being more comfortable with each other,” Matthews said.

The guy in the middle is going to be watched closely again this week and rightfully so. Some observers feel that Matthews is being unfairly targeted by critics, but I don’t feel that’s the case. He’s an unproven rookie, who has struggled in his first two games.

The focus is on him because of his family’s NFL history. His brother, Clay Matthews III is currently one of the best defensive players in the game. His father, Clay Jr. played linebacker for 19 years in the NFL. His uncle Bruce was a Hall of Fame guard. His grandfather Clay played for more than a decade in the league. The Matthews last name helped get him drafted, so it’s understandable if he would draw a great deal of attention.

He’s in a tough position because of the lockout and Reid and Castillo deciding to thrust a fourth round pick into the starting lineup, but he’s not being targeted unfairly. Many of the same people who brag about Philly be a city of tough, knowledgeable fans are crying about Matthews’ play being criticized. Should he be made a “Sacred Cow” because his last name is Matthews?

Andy Reid continues to stand behind him, but yesterday he wasn’t quite as strong in his support as he had been. He used the words, “getting a shot”, when talking about his decision to make Matthews a starter. That sounds like this might be the kid’s last go at middle linebacker if he doesn’t play well.

It’s tough being a rookie this season because they haven’t had the OTA’s, mini-camps nor as many reps as usual. Still the rookie from Oregon says he’s ready to go.

“Where I’m at right now, I’m pretty confident. Obviously, I know the playbook and stuff like that. It’s just minor mistakes . . . something you can get corrected,” Matthews said. “That’s what this camp is for.”

Matthews and company may have to control Cleveland’s big, physical running back, Peyton Hillis and second-year signal caller Colt McCoy. Browns head coach Pat Shurmur is a west coast offense guy, who will be running more of a pure west coast offense for the Browns because of they don’t have the speed at wide receiver as the Eagles do. McCoy is very accurate with the short to intermediate throws.

Hillis has been out of action with a hamstring problem and a sore lower back. He missed the last preseason game and didn’t practice yesterday, which could make life easier for Matthews and the defense.

“If you’re comfortable, things start slowing down. I feel that’s what happened in the second quarter of the Pittsburgh game.”

Mike Patterson Is All Set To Return To Action Tomorrow Night