Eagles Defense Was Impressive With An Assist From The Browns 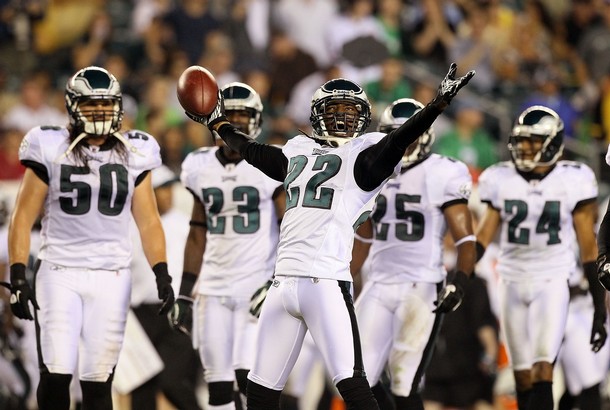 The Eagles defense, especially the pass defense has the potential of being great. I didn’t say they were great but I said they have the potential. If the defensive line rushes the passer like you saw on the Asante Samuel interception, they should be very tough to move the ball on by season’s end.

Last night they put together a dominating performance against the Browns passing attack. If the Birds get a team in 2nd and long or 3rd and long, they have them where they want them. On the other hand, if a team pounds the ball at them with a strong running attack, I don’t have the confidence that this Eagles defense can stop them.

I’m still not excited about their run defense. We saw Cleveland test the Birds run stopping ability only a few times.

Cleveland’s head coach Pat Shurmur did the Eagles a favor by letting his truck of a running back, Peyton Hills have the night off. Hillis ran the ball only three times for 18 yards. On his first carry he dropped his shoulder and pounded the Birds right up the middle as the Browns picked off the linebackers and rest of the interior defense.

If it were a regular season game, Hillis would have been running the ball up the gut and punishing tacklers all night long. I understand Shurmur’s thinking because Hillis didn’t practice on Tuesday because of a hamstring strain and he wants to keep him fresh for the season.

Asante Samuel picked off Colt McCoy last night and it wasn’t even a surprise. This was one time when Samuel didn’t even have to bait the quarterback into making the throw. He squatted on the route and hid behind the wide out for a split second, so that McCoy would throw the ball. Once he let it go, Samuel appeared and picked it off. This pick was due to the pass rush.

Jason Babin and Cullen Jenkins ran a pass rush game, which worked like a charm. Jenkins started things out by attacking the guard to get his attention, but not to the point where he was getting engaged with him. Babin came off the ball on the snap and headed upfield. He then came inside which made the tackle slide inside to keep him blocked. Babin made the play by running into the guard as he went inside.

He grabs onto the tackle for a second or two as he follows him inside. Jenkins comes around outside and there’s nobody there to block him. He attacked McCoy and the quarterback let the ball go without following through. He did an Eli Manning by turning away from the hit as he let the ball go. it was a beautiful pass rush game and it resulted in an interception.

Nmandi Asomugha showed us some of his tight coverage ability. He uses his long arms to jam receivers then he glides along side-by-side with them with ease. McCoy came his way a few times and completed one of them. He tried a deep pass, but Asomugha was right there, so the wide out pushed off and was called for it.

Dominique Rodgers-Cromartie – DRC almost had himself an interception on a play early in the game. He broke for the football, but missed it and the pass was caught by the wide out. He used his speed to come off the corner and block an attempted field goal early in the game.

Kurt Coleman is currently the Eagles best safety. He should have had an interception when he made a great drive to the ball near the sideline. He’s not that big, but he brings everything he has when he hits somebody. I expect he and Jarrad Page to be the starters at safety when the season starts.

Jarrad Page is a competitor who has a good understanding of what they’re trying to accomplish in each coverage. He does a good job of attacking the line of scrimmage when he reads run. Page seems to have quick recognition of plays even though he doesn’t possess stand out speed.

Casey Matthews Makes Progress As They Reduce His Responsibilities