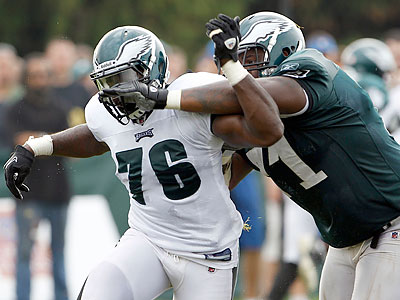 The Eagles have to make a cut of their roster by tomorrow afternoon and it won’t be very difficult, but in a week they’ll have to make some very tough decisions about the players they will keep on the defensive side of the ball. Here’s a quick look at some of the decisions they will have to make.

Defensive Tackles – Cullen Jenkins, Mike Patterson, Antonio Dixon, Trevor Laws (4) – The Eagles will have some tough decisions to make at the defensive tackle spot. They will have to make one of the toughest decisions during this cut down period on Trevor Laws, Anthony Hargrove or Derrick Landri. I think it’s going to be very difficult to release Laws because he showed tremendous improvement a year ago.

Defensive Ends – Trent Cole, Jason Babin, Darryl Tapp, Daniel Te’o Nesheim, Phillip Hunt (5) – Many think that the battle for the last defensive end position will be between Te’o Nesheim and Hunt, but I predict that the Eagles will release veteran defensive end Juqua Parker. He’s been injured for much of training camp and he’s 33 years old. I think he can still play but the Eagles usually take the side of youth. Te’o Nesheim is a lock because he also works inside at defensive tackle, plus he was a 3rd round pick in 2010. Hunt has a tremendous upside with his explosiveness upfield on the snap of the ball. He could become a more complete player by getting stronger.

onto Akeem Jordan because he’s the only veteran backup linebacker with experience as a starter, plus he can play Sam, Mike or Will. I don’t think Greg Lloyd is the Eagles type of linebacker because he doesn’t have the big time speed of the others.

The Birds love their three Pro Bowl cornerbacks, but they are also in love with their talented young cornerbacks, Marsh, Lindley and Hughes. I see them keeping six corners and trading Joselio Hanson, their current nickel back. Rolle and Clayton are linebackers/safeties

Safeties – Kurt Coleman, Nate Allen, Jarrad Page, Jaiquawn Jarrett (4) – I don’t think the Birds are going to keep backup safety, Colt Anderson around because most kickoffs go out of the end zone. I could see them using backup cornerbacks Lindley and Hughes to to cover kicks and play backup safety roles on nickel. Keeping jackson around makes no sense to me because the guy has been hurt for about four years now.

Jeremy Maclin And Steve Smith Practice With The Birds Today

DL – 10 Players
DE – (5) – Cole, Babin,Tapp,Hunt and Teo (B Graham on IR, J Parker released)
DT – (5) – Jenkins,Dixon,Patterson,Hargrove and Laws (Jenkins and Hargrove can rush from the DE positions if needed, I would Prefer Landri over the very inconsistent Laws, but since Laws was a 2nd Round Draft pick, they will keep him instead like they will TEO over Parker)

CB – (5) – Asmo,Samuel,DCR,Hughes & Lindley (J Hanson gets traded or released and C Marsh comes up with mysterious injury soon and goes on IR to to be stashed away for the Season)

Safety – (4) – Coleman, Page, Allen and Jarrett (Colt Anderson gets released as does Marlin “Billie Jean” Jackson as soon as he is medically cleared as does DL V Abiamri)

Man, I liked Jason Babin in his first pit stop with the team and told my buddies he was legit.
He left and made the Pro Bowl with the Titans, and now we got him back.
I’ve always liked Tapp for some reason, and I’m a fan of Hunt.
I know we can’t keep every DE on the team, but those 2 I would keep.

I’m going to say Parker over Te’o because Parker is a good player for 8 games.
He may also benefit from the new scheme and not to hate on a guy, but have you ever noticed Te’o on the field at any point?

Landri would be a mistake to let go, he needs to make this team and play in the rotation.
He is a monster and is hard to miss on the field.

I like how we have revamped our defensive line over the past couple of years, the competition to make the team is good news (difficult decisions mean we’re bringing in the best/right players possible) and they will be a force to reckon with
Cole, Dixon, Jenkins, Babin
Tapp, Landri, Patterson, Hunt
Te’o, Laws, Hargrove, Parker

I hope the Eagles keep Landri over Laws as well..
Laws has been very inconsistnent his entire carreer and I though put on a little too much weight..I saw him beginning of camp and he had to be up to 320-325 lbs.. I thikn the Eagles should turn the page with both Laws and Teo and keep the best players instead (Landri & Hargrove)

Same here, I do like Hargrove more than Laws/Te’o but I can’t be a hypocrite, I don’t hold preseason value that high.
But that is in terms of starters for the most part, and this is finalizing the roster and at competitive positions up for grabs.

I’m amazed these idiots haven’t pushed Daniel Te back to linebacker where he belongs. If they cut Juqua Parker they’re stupid, in my opinion he’s just as good as babin if not better. If they keep Trevor Laws that just means they’re unwilling to admit their draft pick sucked. Laws is garbage. As far as DT’s are concerned, I’d cut Mike Patterson, noway in hell do I let him risk his life, I don’t care if a doctor is optimistic, you don’t screw around with bloodclots, and head injuries in friggin football. Are you kidding me? Do him a favor and cut him.

run – Toe N at LB? Why? You think he can cover TE’s and RBs? He’s small and a pass rusher. Are you just strictly going off of the ‘he played that position in college’ thing?

No go on Teo playing LB.. Eagles have tried that with no luck with players like C Gogong, Bryan Smith, A Studebeker, Ricky Sapp.. He is probably a player (like the others) where if you put him in a 3-4 scheme where he is standing up and his main job is to rush the QB, then he would have some success..
But dropping back into pass coverage is the problem all these players have since they have very little of this (if any) even at the Collegiate level let alone at the NFL Level..

Te’o at LB, absolutely not, I don’t care if it works for you on Madden.
BTW when I get Madden and Te’o is on this team, I will cut him in my franchise!

Wait, Wmonell and paul, i thought that when Run09 posts with a slur, attitude or name calling it automatically make him right…. something doesn’t fit here. If the coaches aren’t the arrogant idiots than what gives?

he sure as shit can’t play de-end

run – ‘sure as shit’ – enh, he looked real bad last year for sure, but 1 year as a rookie, in a system that got 2 coaches fired…. Any reasonable person would say – so far he’s sucked it up but it’s too early to tell whether he will be able to succeed or not going forward. But you? You know everything quickly, for sure. And you then have the gall to call the coaches arrogant… hmmmm

haha
if he can’t play de then his best best is dt on nickel/dime situations
now that i think about it, he doesnt have a best bet now does he? lol

I just can’t see how Nesheim gets a roster spot in front of someone like Hargrove or Landri other than the Eagles FO not wanting to admit a draft mistake. But the question has to be asked, what has he shown to date that warrants a roster spot regardless of where he was drafted. Based on some of the front office’s moves recently, I wouldn’t be too terribly surprised if they decide to cut bait on him in order to move forward. I think the kid has one final shot to make the team this year in Thursday’s game.

I think Teo deserves to be cut loose, it just dodn’t work out in Philly..
Keeping HArgrove and LAndri would be smart move to make..
You start looking back at the 2009 Draft and you have the injured B Graham,
Demoted Safety Nate Allen to 2nd String and now possibly a 3rd Rounder (TEO) not making the Team in his 2nd Season Round, 2 Solid picks in the 4th Round with Clayton, Kafka, Harbor another good one with Cooper in the 5th and Chaney and Coleman in the 7th Round..So the late rounds really have saved this 2009 so far since the top 3 Selections (Graham,Allen and Teo) have not lived up to expecations to date…

Run, fair enough, than ignore my posts. For the record, on this, I agree with xtian, that landri and hargrove look better so that’s why teo should go. I am not willing to close the book on teo as a player yet but im willing to have him cut due to better talent on the team/numbers

G,
I agree with your perception! I still hate the LB’s though! They are not going to win with them! They are going to get eaten alive!