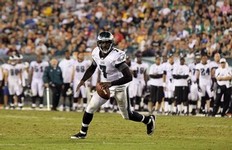 Nine days from now, the 2011 NFL regular season will kick off.

Kickoff weekend is always exciting, but this year is unlike any other.  The recent lockout created doubt among many fans, increasing the anticipation for meaningful football games.

Now that the lockout has been lifted and the “Back To Football” campaign is at full throttle, teams are being ranked and Super Bowl predictions are varied.

Heading in the final preseason weekend, this is my NFL Power Ranking.

This Power Ranking will be updated weekly once the regular season has begun.

I’m sure there will be varying opinions and debates regarding who’s ranked where.  The great thing is….FOOTBALL IS BACK!!!