What Will We Learn About The Phils After These 33 Games In 31 Days? 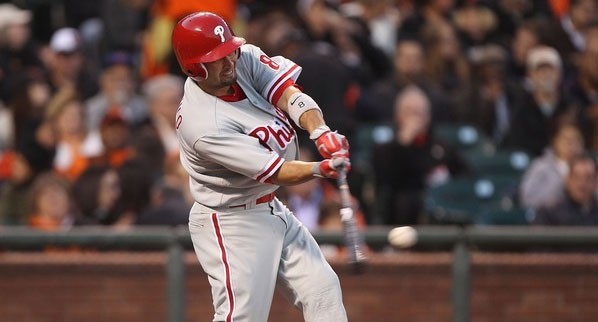 Mother Nature can be remorseless at times. Residents of the Delaware Valley know that all too well after the past few weeks. So do our local baseball heroes and their September schedule just got a whole lot busier thanks to one of the wettest months in this region’s recent history.

While the Phillies have looked invincible at times this season, they were not immune from August’s weather ramifications and will now have to play 33 games in 31 days, which includes two doubleheaders, to finish up the 2011 campaign. While it may sound like a steep order, I believe this season-ending stretch will be a firm test for the Phils to get themselves in playoff form. It started off well with a hard-fought 3-2 win in Cincinnati on Monday night.

As of this writing, Philadelphia is 6.5 games up on Atlanta in the National League East standings. The Phils are most certainly going to the playoffs and are likely winning the division. They have been excellent all season long and are nowhere near a slump but some recent losses have left a bitter taste in fans’ mouths, most notably the ninth inning 3-2 loss to Arizona on August 16th, the 8-4 walk-off loss to Washington on August 19th, and the painful 5-4 loss to Washington on August 21st.

These types of losses happen over the course of a 162 game season and are nothing to fret about but they do show that there are still kinks to be worked out before October. The bullpen needs to steady itself out, Jimmy Rollins needs to get healthy, and bench and bullpen roles need to be sorted out.

There are also questions that need to be answered. What roles will John Mayberry, Jr. and Raul Ibanez play down the stretch and the playoffs? Will Roy Oswalt regain his form and be that fourth ace? Where does Vance Worley fit in as a starter or in the bullpen? Can Brad Lidge and/or the young bullpen arms be trusted in big-time situations? These are just a few examples of some of the questions that will be answered over the next 31 days.

I mentioned above that this culminating stretch will be a test for the Phils. I say that because of the schedule they will face in late August and September. This stretch run includes 4 games in Cincinnati, 3 vs. Atlanta, 4 in Milwaukee (the team I feel is the scariest and biggest threat to the Phillies in the National League), 4 vs. St. Louis, 4 vs. a Washington team that has played them tough all season, and 3 in Atlanta to finish it all up. Let’s throw in those two doubleheaders while we’re at it.

That is a brutal stretch for any team, but for a team the caliber of the Phillies, it is exactly the type of schedule you want to finish up with.

How do you get yourself playoff ready? You play teams like that down the stretch. What better way to test yourself than to go up

against other top-level teams? Charlie Manuel will tell you that he wouldn’t have it any other way.

As noted before, the Phils are currently 6.5 games up on the Braves in the division standings. The ultimate goal for the Phillies during this 33 games in 31 days trek is to continue to put the breathing room between themselves and the Braves and make that last series in Atlanta irrelevant. The last thing you want is to have a bit of a slide and have those last three games of season at Turner Field mean something. The good thing is that the majority of the teams they play down the stretch will keep the Phils on their toes.

I have no doubts that the Phillies will come out of this stretch relatively unscathed, lock up the NL East crown sooner rather than later, and will be ready for their playoff run.

Why Are We Running Offensive Linemen University In Front Of A $100 Million Dollar QB?

Nice Article Greg and I agree that it’s a good thing that the Braves are still in the neighborhood and that the Phils finish with a tough schedule, this will only help the Phils come playoff-time.. If they, or any other team, simply have it on cruise-control for the final month of the Season then it’s very difficult to just “turn it on” come Playoff time.. Play hard and meaningful games to the end of the Season is the best preparation for the Phils moving forward..