Vick Not Concerned About Jackson’s Attitude, Despite Lack Of New Contract 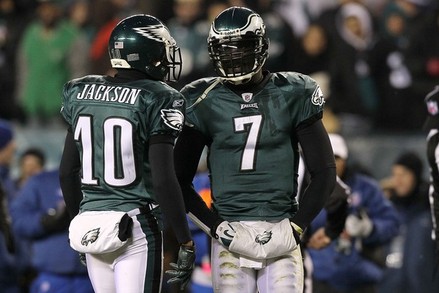 Do you remember back in 2005 when Terrell Owens was publicly attacking Donovan McNabb because the quarterback wasn’t fighting for him to get a new contract? It’s six years later and we have a similar situation going on here with the Eagles, but the wide receiver isn’t making the same demands of his quarterback.

It’s a different year and the names have changed on the roster, but there’s a similar situation in that the Eagles have a franchise quarterback with a multi-million dollar contract and a star wide receiver, who is unhappy with his deal and he wants a new contract.

Yesterday, Vick was on 94WIP on Ike Reese and Michael Barkann’s 10am to 1pm show, which is aptly titled “Mike and Ike”. Ike asked him whether he was concerned about the mindset of Jackson going into the first game of the season.

“I’m not concerned at all about DeSean”, Vick said. “The last two weeks DeSean had the best practices that I’ve seen him have in a long time. His attitude is different. He’s got a smile on his face. He’s dedicated to the sport. It’s an opportunity for him to be blessed in his life. He knows he’s got to go work for it. He knows everything that comes along with it. How certain things have to be done.

He understands the whole realm of everything now………”.

“DeSean is happy now and he put everything on the back burner because he knows that’s what’s important is taking care of things. Everything will work out for him. I’m happy about where he’s at right now, I like his mindset. I look for him to have a great year this year”.

Hopefully, the Eagles will get deal done with Jackson before too long.

The Eagles are trying to clear cap room for DJ. It will happen sooner than later.

It was reported that Justice and J Parker took pay cuts to stay with the Eagles,
Anyone know how much under the Cap the Eagles at the present time…
Remember, that a team should keep a certain amount available in case of player(s) injuries, where a team would have to go out and pick-up another player (s) so I don’t see the Eagles completey using up all their Cap Space just to extend D-Jax..

JUST PAY THE MAN. WE DO NOT NEED DRAMA TO START THIS SEASON.

DeSean should talk to Byron Evans.

Come on! This situation is completely different, what a joke of a comparison. Owens was one year into a new contract. Jackson is in the last year of his rookie contract and has outplayed every year of his contract.

B&E was my favorite dude back in them days…. I was destroyed when he got hurt against the browns in a game and never came back….

I think people are oversimplifying the situation here with DJax. I don’t think it’s a case of the Eagles not wanting to sign him. I’m sure there’s a dialog going on between the team and Rosenhaus.

More likely, the problem is how far apart the two sides are on the numbers. I’m guessing that neither side is refusing to sign a deal as long as the numbers are agreeable to them. I think most fans would agree that DJax is not Larry Fitzgerald. So what’s he worth?