Vince Young, Only Bird Held Out Of Practice 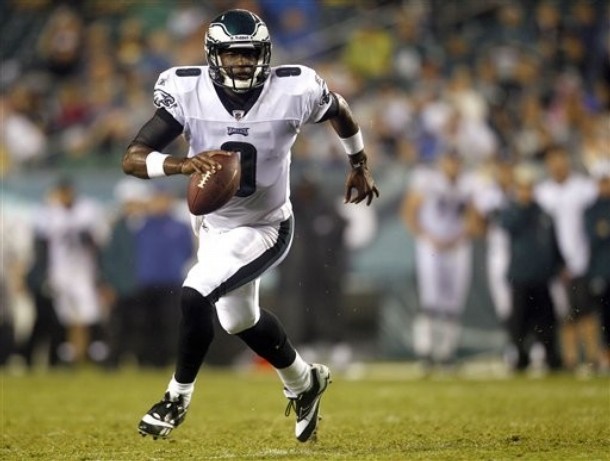 Vince Young didn’t practicing today even though Reid said he’s been making good progress with his hamstring. The head coach said he has no problem making Mike Kafka the backup quarterback if Young isn’t able to go. Reid says if he didn’t feel so good about Kafka he wouldn’t have traded Kevin Kolb.

According to Reid, backup right tackle Winston Justice is getting better. I saw Justice walking through the locker room and his knee wasn’t wrapped and he didn’t seem to have any swelling which is a good sign when players start working back into full scale practice.

The following players did practice fully, but they still aren’t totally 100%.

While in the locker room it was interesting to see defensive ends Brandon Graham, who is on PUP (physically unable to play) and Daniel Te’o Nesheim, practice squad, heading out of the locker room together. Think about it. These two high picks, Graham in the first round and Te’o Nesheim in the third are doing nothing for this football team. They were brought in here with much fan fair, but now they’re nothing but after thoughts.

Notice that you have a third round pick from a year ago in Te’o Nesheim, who nobody goes after to bring into their camp. It means the Eagles had a higher regard from him than any of the other teams in the league.

Remember the Birds also released another third-round pick from a year ago, when they released Trevard Lindley.

Reid: Casey Matthews Is Getting Better Each Week

Brad McCrimmon was has good player (#10 I believe) vey consistent and well liked by his teammates and fans.. Our thoughts and prayers go out to all the families… (there has been a lot of Airline Crashes in Russia it seems like lately)

Coulda had Earl Thomas instead of Graham.

Who cares, he is a non-factor on this team, right now. If Vick goes down, which might happen more sooner than later with this line, they won’t win squat, anyway. VY, is a mental case & not a good QB. That signing, was even a bigger head scratcher than Ronnie Brown & Reid’s drafts. Wouldn’t that $$$ look better invested on the O-Line & Lb, right now!? Thank God, they signed Asomugha, Babin & Jenkins, because they would be getting crucified!