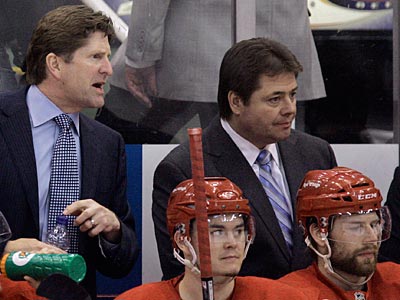 During an offseason filled with players exchanging jersey and general managers becoming instant legends for years to come, another tragedy has struck the heart of hockey. Wednesday morning, a plane that crashed shortly after takeoff, claimed the lives of 43 people including all but one member of the Lokomotiv Yaroslavl.

The tragedy claimed the life of former Philadelphia Flyer, Brad McCrimmon. The defender played for the Bullies for four seasons having a standout year in 1986. His plus 83 rating was enough to earn him the Barry Ashbee Trophy, awarded to the Flyers’ top defenseman.

After parting ways with Philly at the end of the ’87 season, McCrimmon played journeyman for the next ten years before hanging up his skates after a six-point season with the Coyotes. The defenseman began his coaching career and was on the staff of four NHL teams (Islanders, Flames, Thrashers and Redwings), before moving to the KHL to become a head coach last May.

Players from around the National Hockey League have expressed remorse and condolences through interviews, twitter and even public statements. But Ilya Bryzgalov summed up most of the NHL’s emotions when telling NHL.com, “It’s a tragedy. I know a lot of guys on that team and it’s a big loss. It doesn’t matter which country it

happens in. We’re all people and we understand what kind of tragedy this is.”

The remaining member of the team, Alexander Galiov, is in critical condition with severe burns on 80 percent of his body. Galiov played junior hockey with Alexander Ovechkin who learned about his friend’s death at Washington’s practice rink.

The star told reporters, “I played with him when I was a little kid and again in national team, junior. It’s kind of a scary moment; a whole national tragedy.”

Lokomotiv Yaroslavl is a member of Russia’s Kontinental Hockey League (KHL) and had a roster containing seven former NHLers including Pavol Demitra.

Demitra left his family at his home in Michigan to play a season in Russia after contract talks with multiple clubs including the Rangers went south. The Slovakia native played for five different teams and tallied 768 points playing at hockey’s top level. Demetri was tied for the most points in the 2010 Olympics when playing with Marion Gaborik on the Slovakian National Team. The quick sniper had a key goal in the seventh round of a shootout against the heavily favored Russians which advanced his country to the medal round. The 36-year-old’s untimely death was confirmed by his agent Wednesday afternoon.

The NHL commissioner expressed his condolences as well in a statement made on NHL.com yesterday afternoon. All in all this has been a tragic offseason and everyone is ready for the team’s to take the ice in October.

Vince Young, Only Bird Held Out Of Practice