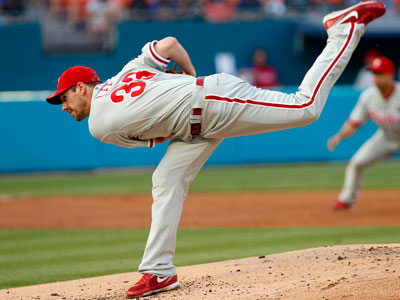 After Wednesday night’s thrilling 3-2 come from behind win over visiting Atlanta, the Phils stand 10.5 games up on the Braves in the NL East and have a division clinching magic number of 12. They are most certainly going into the playoffs as the top seed and will have a few games to rest up their regulars before the second season begins.

The 5-game NLDS rotation is easy. The Phillies will obviously start their top three hurlers, Roy Halladay, Cliff Lee, and Cole Hamels, in that series. All three have just been ridiculous all season long, so good luck to the poor souls that have to face them in a short series. The only unknown hereis will start which game.

I really feel that Cliff Lee should go in Game 1, followed by Roy Halladay in Game 2, and Cole Hamels on the road in Game 3. That may catch some fans off guard, but think about it. Lee is been particularly absurd as of late and, outside of last season’s World Series when he was with Texas, has been dominant in his playoff career. This is no slight at all against Roy Halladay. The man is a machine. But if Cliff Lee stays hot, he has to be the Game 1 starter.

Another reason I would like to have Lee start Game 1 is because I am big proponent of separating the lefthanders. It could be particularly tricky for a young team, such as the Phils’ likely NLDS opponent Arizona, to switch up their game-plans and/or lineups and adjust. And, god forbid, if the Phils lose Game 1, all the opponent has to do is face

Roy Halladay in Game 2. Not too shabby. Not to mention we all know Hamels will deliver on the road in Game 3. That’s just what he does in the playoffs.

It gets a bit slipperier if the Phils advance to the NLCS, where a fourth starter will be needed. My choice for said fourth starter: Roy Oswalt.

I know that Vance Worley is 11-1 with a 2.85 ERA but he doesn’t have the big game experience of Roy Oswalt. Oswalt is big game pitcher who will be unfazed by the environment. I know he hasn’t been in prime form this season with the injuries and all, but he seems like he is back on track after his past few starts where he threw over

100 pitches. He was stellar on Wednesday against the Braves. Plus, you kind of get the sense that Charlie Manuel and Rich Dubee want Oswalt to be that guy. Why else would let him throw deep into his past few games? It’s all or nothing for the Phillies this postseason and Oswalt is more of a sure bet than Worley right now.

How about the bullpen?

Ryan Madson seems to have cemented his grip on the closer’s role. No surprise there. He’s had a couple hiccups but he’s the right guy for the job.

Kyle Kendrick, Michael Stutes, and Vance Worley, along with Roy Oswalt in the Division Series, should be the earlier inning relievers. Stutes is just too inexperienced and has been too inconsistent lately to have a late-inning playoff role. Imagine if one of the starters falters early on and you have the ability to bring in a Vance Worley or Roy Oswalt

to keep the game within reaching distance. That’s quite a luxury.

Depending on the matchups, I like Brad Lidge and Antonio Bastardo as the 7th/8th inning options. Lidge seems to have regained a feel for his slider lately while Bastardo has been just filthy all season long. Bastardo will be the guy called upon to mow down that power hitting lefty in late game situations. He could even be sent in to close depending on the situation and effectiveness of Ryan Madson.

Worley and Oswalt are late-inning wild cards. I wouldn’t be surprised to see either of them sent out there in crunch time. As a matter of fact, I kind of like that idea. I think both are intriguing late game options.

There’s one thing I know for sure though. I wouldn’t want to be in the opposing lineup staring down any of the Phillies pitchers, particularly the starters, come playoff time.