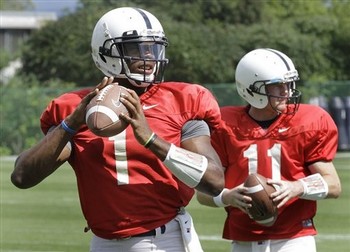 Squaring off in Happy Valley this Saturday are two teams with two starting quarterbacks each. Both Alabama and Penn State had two signal-callers split time fairly evenly as their teams dined on their respective cupcakes last week. As of now, it looks like the time-share method will continue into this weekend for both teams.

“I like both those kids”, said Penn State Head Football Coach Joe Paterno when being asked about co-starters Matt McGloin and Rob Bolden earlier this week. Penn State fans may like both of the kids too, but they seem to be split as to whom they would want to see as the sole starter. However, the more important issue is whether the team is split on that issue. Recent comments by Matt McGloin in pennlive.com suggest that such sentiment may exist. McGloin proclaimed that when he is in the game, “We just have a better vibe and we move the ball a lot better.”

Regardless of whether McGloin’s comment is true, Penn State will need more than vibes to score on Alabama’s defense – they will need their quarterback(s) to make plays. ‘Bama’s defense is loaded – especially in their front seven. Yards will be hard to come by for Lions’ running back Silas Redd this week. He and the Penn State offense will be faced with a 3-4 defense that features two 260+ lb linebackers in Dont’a Hightower and Courtney Upshaw and a big, athletic defensive line which held Kent State to -9 rushing yards last week. Given Alabama’s stout run defense, Penn State will likely have to rely on their quarterbacks to come through on 3rd down. Last week’s 2 for 10

3rd down conversion rate will not cut it if they expect to be competitive.

Even if the Lions do improve on 3rd down, the defense must force Alabama’s duo of quarterbacks into turnovers. A.J. McCarron and Philip Sims, collectively much more talented than Penn State’s pair, each showed promise in their opener against Kent State. McCarron moved the team down the field well early in the game, and Philip Sims was less impressive, but was able to muster some offense when he was given the reigns. However, both starters threw two interceptions. If one or both players turns the ball over as they did last week, Alabama will be on upset alert.

Outlook
Penn State’s quarterbacks give me little reason to believe that they will put many points on the board against Alabama. While McCarron, who I believe will receive more significant playing time than Philip Sims, may cough up

the ball a couple times, it won’t be enough for Penn State to win. They could possibly cover the 10 point spread, however, given their defense’s matchup against the inexperienced McCarron and/or Sims. But in the end, Alabama just has too many weapons.

Names you don’t know now but will know by the end of the game:
Alabama – Josh Chapman (NT) – Junior college transfer anchors what may be the best defense in college football; Marquis Maze (WR) – The Crimson Tide’s QBs will be relying on this fast twitch playmaker when room for Trent Richardson and Eddie Lacy is tough to come by.
Duron Carter – This talented wide receiver is Cris Carter’s son and a Junior College transfer, who is expected to make his debut for the Crimson Tide this Saturday.
Penn State – Nick Sukay (S) – The playmaking fifth-year senior will look to take advantage of the inexperienced Alabama quarterbacks and pick up where he left off before last year’s season ending injury.

Other Games of Note
Arizona @ Oklahoma State – Can the Wildcats keep up with the firepower of Brandon Weeden, Justin Blackmon and the rest of T. Boone Picken’s bunch? Whether they can not only means a lot for Arizona but for any PAC 12 team with BCS bowl aspirations, including Oregon, Arizona State and Stanford.

Notre Dame @ Michigan – The Irish will have no problem getting their emotions up for the first night game in the Big House. The problem is, neither will the Wolverines. Did Notre Dame Coach Brian Kelly make the right move by switching from Dayne Crist to Tommy Rees or does the South Bend QB seesaw continue after this week?

South Carolina @ Georgia – The SEC East favorite Gamecocks look to take their first step to a second straight SEC East title. Georgia, still smarting from being handled by Boise State, need this first win to keep Mark Richt’s seat from getting hotter. Freaks named Alshon Jefferey and Jadeveon Clowney will not make it easy for the Bulldogs.

Hugh Douglas: Jack Del Rio “needs to be punched in the face”

Do we even have a chance?

Penn State has fallen out of the TOp #20 Elite Programs in College Football
They will blow out the Buffalo’s, Akron’s of the worlrd and then split in Big 10 Conference Schedule and beat the crappy teams like Indiana,Purdue and Minnesota adn then lose to the Top teams of the Conference like Iowa, Wisconsin,and Ohio States and probably splt games with Northwestern,Michigan and Michgan State and Illinois..
This Program is stuck in mediocrity and I still say it was a huge mistagke to join the Big 10 since most of the Recruits, Recruits Families and High School progrmans who feed te recruits, Alumni and Boosters mostly live between the Washington DC and Metro NY Markets (Eastern Pa,NJ,NY & CT) and these recruits, their families and alumni are not going to tracel up to a 1000 miles to see road games out in Minnesota,Iowa, Nebraksa,Illinois and WIsconsin.. Penn State has completely moved away and abandoned from it core base (Which was the Md-Atlantic regions and now doesn’t even seem like the great Mid-Atlantic University that it used to be anymore… Stupid Move on Joe Pa’s part
If the Big-East still had Penn State, with Boston College and then add the current schools of West Virgiania,Pitt, Syracuse,U Conn, Rutgers and then grab a U of Maryland , then you would have a pretty strong Football COnference in the Mid-Atlantic/Northeast which is closer to all the Recruits, their high schools and freinds, their families and of course their Alumni and Booster… What Penn State has now and what the Big East COnference has now has become a joke and real shame if you ask me…

Is it me or does it appear that every time Penn States plays a big time or very good College Team, that the opposing team Head Coache’s have a tendency to let up and take the gas off the pedal a bit when going against Paterno..It appears that other Top Coaches in respect for Joe Pa, don’t want to run the score up or rub it in to him so they put their Offensive Teams on “run the clock out mode” and not embarass Penn State when playing them anymore… I think it’s sad to see..