With The Braves In The Rearview Mirror, Bring On The Brewers 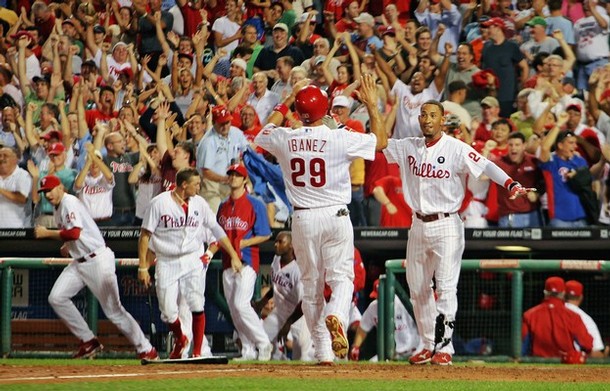 As the Phillies essentially play warm up games for the MLB post-season, the Fightins entered a meaningful three game series against the Atlanta Braves who came in a distant second to the Phils in the NL East.

The series held significance not in the standings, but in the psyche and the confidence of both clubs. A quote by Chipper Jones before game one of the series stating that the Braves match-up best against the Phillies and have the best chance of knocking them out of the playoffs.

I’m not sure what Chipper thinks now but what transpired in this three game series has to be a drag on not only Atlanta’s confidence but also every team in the National League. And if the Phillies dominate in their next series against NL Central leading Milwaukee Brewers then doubt will inherently creep into the minds of every team in baseball.

The Phils’ sweep exemplified all of the ways that the club can win. Game one saw Cliff Lee established once again why he is one of the best pitchers in baseball by notching his sixth shutout of the season. Lee also won National League pitcher of the month for August. Lee won the award for the second time this season, making the first pitcher in Phillies history to be graced with such an honor.

Game two of the series saw Vanimal achieve his 11th win of the season. Worley pitched out of trouble in the middle innings but in the end pitched well enough with ample run support to pick up the win. Which of course Vance did. Since June 13th the Fighins have not lost a game in which Worley started.

The third game perhaps was the scariest to NL opponents. The Phils showed guts and scraped out a 2-1 walk-off in. Roy Oswalt got the nod for the last game and for the first time in a long time looked healthy. Oswalt went deep into the game and the Braves offensive struggled to figure him out as he took a no-hitter into the 6th inning.

The box score only explains part of the story of this series. The Phils were playing a team that really wanted to beat them to send a message. Instead the Phillies were the team that came out and made it clear exactly what the message was.

The Phils also over came a driving rain and an hour and 52-minute rain delay in game one of the series further proving the teams talent and resiliency. Another ode to the Fighins talent and resilience is the fact they are able to win a big series with out offensive spark plug, Jimmy Rollins

The Phillies will play Atlanta in one more series this season. It will come on the last week of the season and more than likely will have no barring on playoff seeding. The Phillies are a franchise record 43 games over .500 and have reached the 90-win mark for the fourth year in a row, also a franchise record. Is it October yet?