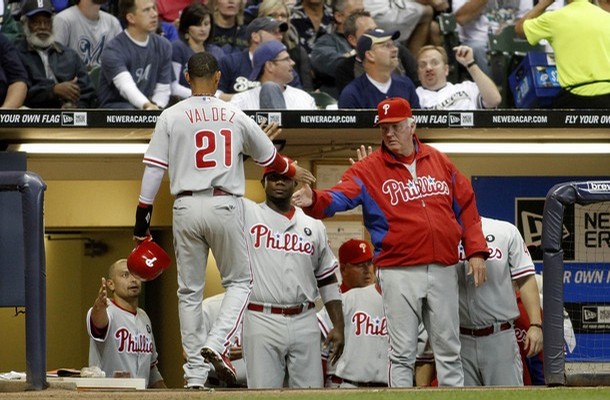 In the first of a four game set with the Milwaukee Brewers, Phillies manager Charlie Manuel opted to play a different lineup, resting Ryan Howard, Raul Ibanez, and the injured Chase Utley, and playing Wilson Valdez, Ben Francisco, and Michael Martinez all together at once.

For five innings, it looked as though the dramatically diluted lineup wouldn’t be able to generate a lot of offense. Brewers starter Chris Narveson had allowed just two baserunners through the first five innings, and recorded the first two outs in the sixth inning. And then the wheels fell off for the lefthander.

Narveson would be unable to record the final out in the inning, giving up six runs on six hits, and also walked a batter. Shane Victorino got the rally started with a two-out double. Wilson Valdez followed the centerfielder with a double of his own. After Placido Polanco worked a walk, Hunter Pence came up with a two-run triple to rightfield.

John Mayberry then kept the inning alive with an infield single. It was a close play, and it looked as though he was out on the replay, but the outfielder’s hustle was enough to force the umpire to make a tough call, and he was lucky enough to receive a favorable decision.

Mayberry followed his hit by stealing his seventh base of the season, and with the inning still alive, Carlos Ruiz hit a ground rule double, and Ben Francisco followed him up with an RBI single to cap the scoring for the inning.

Starter Cole Hamels turned in an excellent performance, throwing his third complete game of the year. He only allowed two runs on four hits, though both hits were homeruns. The lefthander did a great job shutting down the high-powered Milwaukee offense, holding stars Ryan Braun and Prince Fielder to a combined 1-8 at the plate.

This game was the latest in a long line of impressive victories for the Phillies. On a night where many of the regular starters had the night off, it would have been easy for the team to simply take the night off, but the players who had an opportunity to play took advantage of the chances granted to them.

Player Of The Game: Hunter Pence

One of the only regular starters in the lineup tonight, Pence’s two-out, two-run triple was one of the most important hits in the six-run sixth inning, and it was the hit that put the Phillies on top for good. The outfielder also added another RBI in the ninth inning with a two-out double.

With The Braves In The Rearview Mirror, Bring On The Brewers

Nmandi On Eagles Defense: “good enough to go out and dominate”

NEXT!!! Keep mouthing off boys! Beat your @$$e$ without Howard & Utley. Anybody still scared of the Braves & Brew Crew? I’m not! Parade time soon, baby!!!!