Young Is Doubtful & Steve Smith May Play This Weekend 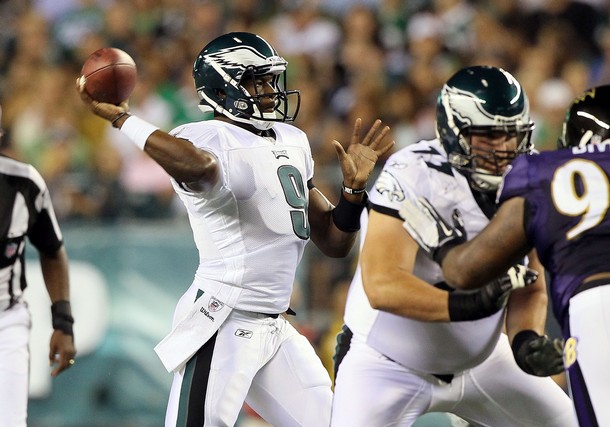 Eagles head coach Andy Reid said backup quarterback Vince Young took some snaps today and looked okay, but he’s listed as doubtful for Sunday’s game against the Rams. If he can’t go, Reid said that he’s willing to play the game with Michael Vick and Mike Kafka as his only quarterbacks.

Wide receiver Jason Avant will be the emergency quarterback.

There’s a chance that Steve Smith plays this weekend. According to Jeff McLane of Philly.com, Smith says he’s ready to play and the Birds have put together a four-wide receiver set for him.

“It is a miracle. God, I guess, helped me heal. You know, I’m still healing, I’m still getting better. But I’m just able to do stuff,” Smith said.
The former Giants star wide out has been working hard to get ready to

“I’m behind DeSean and I got me a package of plays in the four-wide set, so we’ll see what happens,” Smith said.

According to Reuben Frank of CSNPhilly.com, Michael Vick got fired up watching the Packers beat the Saints last night. “That game got me really excited to go out and play on Sunday”.

Eagles cornerback Asante Samuel jammed his shoulder in practice while trying to defend a pass to Riley Cooper. The training and coaching staff don’t think it’s going to amount to anything, so he’s listed as probable.

Reid said DeSean Jackson is ready to go on Sunday.

Veteran defensive end Juqua Parker is ready to go according to Reid.

Aerial Display By Rodgers & Brees Got Vick Excited For Sunday

My disclaimer: I still lean toward a “more” balanced offense.

Drummer- I thought the same thing about the Pack and the Saints.

Even though Packer QB Rodgers played phenomenal at the Start of last evenings game, He was getting hit a lot those 1st Couple of Series as the Saints were blitzing left and right.. Does anyone think that VIck makes those kinds of accurate passes under that kind of pressure…

drummer – having read your posts for a long time now and knowing you’re orientation toward the ratio… BRAVO – great post – way to show some balance and sanity. See that’s admirable.

I agree with you Vinnie..

Vick won’t need to make the accurate throws in those situations. He,ll just take off with his legs. That’s the one thing Rodgers and breed don’t have on him.

Best to keep Vince Young under wraps for the time being. Judging by what I’ve seen of him in the preseason, he may just be the best insurance policy the Eagles could have.

And thank God the Eagles finally wised up and got some help at the guard position. Do you think it would be asking too much for them to run the ball just a few times? .

Like I said before about VY, who cares, he is a non-factor, mental case, bum. If Vick goes down, our hopes for making playoffs are done anyways. Smith, if ready & healthy, will be a major plus to the receiving core. Especially if DJax pouts & decides to pull a David Copperfield.

@Deepthreat-They are going to HAVE to run the ball……..no choice until OL comes together. Teams are gonna game plan to take their deep game out. Don’t be surprised to see an AR/MM game plan that is run/screen/TE heavy.

You’re not crazy Johnny. The Green bay Saints game showed that no matter how potent your passing game; to win in the NFL- you have to be able to run the ball on offense – and stop the run on defense. Stopping the run will be an area the Eagles should be preparing for this week with the Rams.