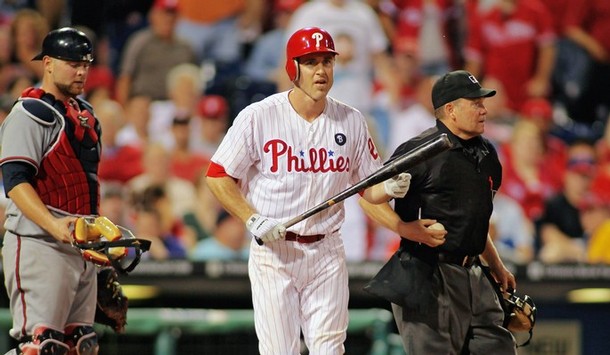 When Roy Halladay took the mound Wednesday afternoon, there was one win separating the Phillies and a playoff spot. With Huston looking for a sweep, the Doc made sure Philly would be in the playoffs before dusk. Halladay threw a six-hit shutout to clinch Philadelphia’s playoff berth during a 1-0 pitcher’s duel at Minute Maid Park.

Placido Polance came through with Philadelphia’s only run when he singled home Shane Victorino in the first inning, but other than that, Charlie Manuel’s offense was lacking. The Phils were held to four hits on the day, with Michael Martinez and Pete Orr combining for no hits in six at-bats.

The middle infielders have been filling in at second base for Chase Utley who suffered a concussion last Wednesday night against the Braves. Eric O’Flaherty beamed Chutley with a 91 mile-per-hour sinker that struck him in the side of the helmet.

Utley’s casual walk to first base made it appear that the second baseman was fine, but after complaining about headaches when playing defense, Manuel pulled him from the lineup.

The matchup against the Braves was the last of the Phillies’ home stand and the California native did not travel with the team to Milwaukee or Huston.

The Phils nearly swept the Brewers but Huston has had their number thus far in the series. When the Astros traveled to Philadelphia for the first series of the year, Hunter Pence was on the losing end of a Philly sweep. Lee, Halladay and Oswalt threw gems against the ‘Stros and as easy as that, the Phillies were atop the NL East.

The lineups have drastically changed since that April matchup, but even in the season’s first series, Utley was nursing a knee injury and didn’t appear in Manuel’s lineup. The versatile player proved that the knee injury was behind him when converting on every stolen base attempt he has taken this year. (13 stolen bases)

Sure his knee is fixed, but when a player suffers a concussion, things start to get a little more complicated. Concussions have proved to ruin players’ careers in hockey and football, but lately there has been an unfortunate increase in head injuries in baseball.

During the 2009 season, David Wright suffered a concussion and saw drastic long-term effects. Despite finishing the ’09 season batting above .300, the Mets’ third baseman, has yet to see productivity anywhere near that success since.

Justin Morneau has also been plagued by the concussion bug. He suffered a head injury during a collision at the plate in 2010 causing the former MVP to play in only half of the Twins’ contests. Morneau was sidelined again earlier this month with concussion symptoms and has been taking part in light workouts, but is yet to return to the field.

Utley has no prior history of head trauma and his concussion was categorized as mild, but Philadelphia is still hesitant to put the slugger back into the lineup. On Monday, the second baseman passed his second Impact Exam, which showed no lingering concussion symptoms.

The all-star took part in drills on Tuesday and could return to the team as early as Thursday’s doubleheader against the Marlins.

Utley’s injury plagued season leaves him batting .269 with 40 RBIs this season, which is not what fans expect out of the four-time Silver Slugger. The Phils’ management isn’t worried about their stars lack of production and Manuel is expecting Utley to finish the season strong, despite his minor head injury.

Philadelphia’s bench minder is convinced all Utley needs is at bats and the rest will work itself out. Whether at-bats or time off is needed, one thing is certain when the Phillies take the field in October; nobody besides number 26 will be standing at second base.

Matthews And Eagles Run Defense Is Headed For Another Challenge