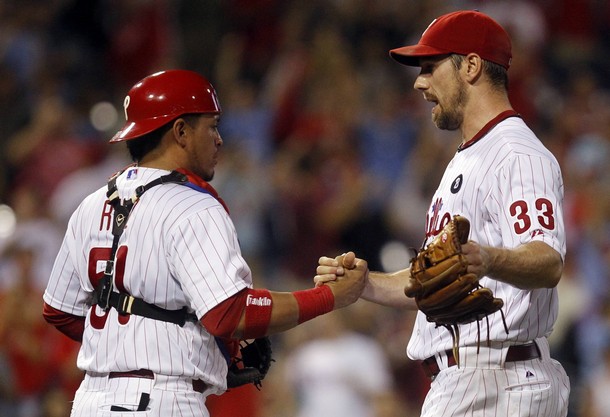 But wait. Is Cliff Lee even the best pitcher on his own staff? With Roy Halladay and Cole Hamels putting up Cy Young-like numbers this season, some may say Lee isn’t even the number one, or in some cases, the number two pitcher in this rotation.

Halladay has the wins, whereas Hamels has terrific numbers, but slightly below those of Doc and Lee.

So it’s a two-horse race between the Phillies aces. Add Los Angeles’ Clayton Kershaw and his ridiculous breaking ball, and the NL Cy Young is a three-man race that will ultimately come down to the wire.

Between the three pitchers, Lee has the highest ERA (though, it’s a very subtle difference). There’s just a 0.14 gap between Lee and the NL’s ERA leader, Kershaw. As for WHIP, Kershaw leads that area, as well, but not by much. There’s just a 0.03 difference between himself and Lee.

In those terms, it’s nearly impossible to decipher between the two.

Once again, the two are nearly identical, making it rather challenging to determine who deserves the hardware more.

Lee has more complete games than Kershaw, and is by far and away the MLB leader with six shutouts. The next closest in the NL is two (Kershaw, A. Sanchez, J. Garcia).

In that remark, Lee maintains a very small advantage.

But let me provide the ultimate reason as to why Lee deserves his second Cy Young and his first NL Cy Young.

In those two months, Lee went 10-0 with a 0.33 ERA. That right there is one of the most remarkable statistics in the 2011 season. In fact, only two other big leaguers have ever strung together two months in which they had at least five wins, no losses, and a sub-1 ERA: Hall of Famers Bob Gibson and Walter Johnson.

Kershaw, Halladay and Lee may be even in terms of statistics — there’s literally a deserving case to be made for all three of these guys. The Cy Young is awarded to the league’s best pitcher; when Lee is on, there is not one other pitcher out there (besides Justin Verlander) that is more impossible to hit.

DeSean Jackson On Falcons Game: “PrimeTime Is My Thing”

Can’t you even wait until the end of the game?

It’s ashame neither Lee or Halladay will win. They will cancel each others votes out. Kershaw or Kennedy will unfortunately get the nod! My vote is for Lee. It’s ashame this offense wasn’t clicking early o, because if Lee, Halladay & Hamels had any run support, they all could have 20 wins all ready. Lee had 1 run or less, in run support, 5 games in row at one point, if i’m not mistaken.

what a masterpiece lee pitched! it is so much fun to watch.
What a game! Ryan Howard and those over rated rbi’s saved the day!

Flip a coin, although Lee!s streakiness compared to Big Roy’s consistency makes a better case for Doc, and how about them overrated RBI s haveacigar, pure foolishness

What a wonderful problem to have. Hell a month ago I thought Hamels was having a better year than both Lee and Halladay. lol Hamels should have 20 wins. But Lee has been lights out. Love ya Doc but Lee has friggin dominated going on 3 months out of this season.

Anyone notice how all of the sudden Ibanez can hit again? Over the last 2 months he just crushes the ball. Then on top of that, last night he guns a runner out at home. Ive been watching Ibanez for years and he could barley reach 3rd base. Amazing transformation.

Got a feeling we’ll get 1 parade this winter. It will be the Phils. Gonna be fun.

ibanez has been a solid part of this team for three years! he gets busted on by bloggers but he is a solid, not spectacular player!
Lee is just lights out== spectacular

Dag- Mayberry was the best thing that happened to Ibanez. Gave him much needed rest and now he is producing again. Maybe the competition didn’t hurt either.

I think that DD is right in that having 3 aces is going to hurt them in the voting, but I think that Lee deserves it because of his shutouts. 1 pitch away last night from 7 in a season. That is insane.

Mayberry and pence brought right handed power, production to what was then a power outage, two key additions, ddcar, don’t put a jinx on it with this parade talk, stick to being negative about eagles chances, lol