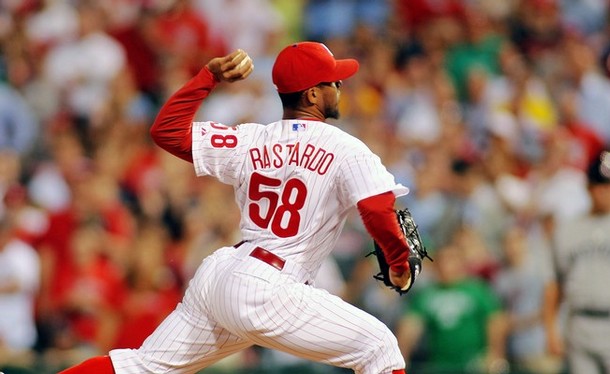 A disturbing trend in recent weeks for the Phillies has been the effectiveness of reliever Antonio Bastardo. The young lefthander has been spectacular for most of the season, but it seems as though his workload is beginning to catch up with him, and take its toll on his effectiveness.

Bastardo entered the game in the eighth inning of Friday’s game with the score tied at 1-1. He made it through the inning, but allowed a solo homerun to give the Cardinals the lead.

It was the sixth run Bastardo has given up in his last 10 appearances. He had given up just seven earned runs in his first 51 games. In those last 10 games, the rookie has an ERA of 6.75, giving up five hits, and walking eight. The walks are particularly concerning for the setup man, if he is struggling with his control and consistently walking batters, he’ll be as useful out of the bullpen as J.C. Romero has been in recent years.

How concerned should the Phillies be about their eighth inning man? The team has certainly used Bastardo a lot this season, only Ryan Madson has seen as much work as Bastardo out of the bullpen this season. Perhaps he’s simply going through a bit of a dead arm period, or maybe teams are beginning to adjust and catch up to him a bit after getting a long look at him throughout the season.

Luckily the Phillies still have several weeks to work with Bastardo, and get him back on track in time for the playoffs. Its still a little too soon to be seriously concerned about the shape he’ll be in for October, but its definitely something to keep an eye on moving forward. He’s been such a key member of the pitching staff all season, the Phillies need him in top form so that they can be confident in him in October.

A Look At Week 2 In The NFL

I think you can add both Stutes & Madson to this list for being inconsistent over the last month or so… Come Playoff Time I would expect either Oswalt or Worley to be in the bullpen as well as Kendrick so they should haev some more felxibilty..
Closing out games is the key for the Phils to win a Championship and if the Bullpen can collectively pitch like they did most of the Season, they will be fine.. but if they do pitch like they have recently, there it’s up in the air and anyone’s chance to Win the World Series

Can Worley or Oswalt come in the 7th inning and give us 1-2 innings every night? Bastardo was the only reliever I had any confidence in throughout the year and that is gone right now. I have no confidence in any reliever. If that changeup isnt working for Madson he gets hit hard. We definetly need Bastardo to get back on track to win the series. I just cant see our bullpen getting through the Yankees, Boston or Rangers lineup.at this time. Better hope our starters go 8 plus.

Not everynight they can’t.. But if they rotate them eveny other game, they probably could.. If they get to the WS, I see the Phils possibly going with a 3 MAn ROtation (Hallady,Lee & Hamels) and having both WOrley/OSwalt.Kendrick all coming out of the Bullpen..
I stated over a month ago that I thought it was a good Idea when Oswalt returned from his injury , was to keep Worley as the 4th Start erand start using Oswalt out of the Bullpen just to get a month or so work out of the bullpen to get into a comfortable routine and to be ready come playoff time for this Role..

If you look at most of the Phils losses over the last month, it’s primarily been due to the Bullpen not being able to close out games where they were golden all Season Long and may now come back to haunt the Phils and be their achilles heel as the Playoffs get ready to Start.. I think all 3 Relievers (Stutes,Bastardo & Madson have tired arms at this point) and especially youngsters Stutes and Bastardo have probably pitched the most innings of their young careers..)