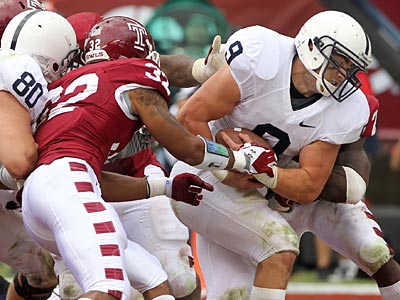 It wasn’t a pretty win for the Nittany Lions, but it was a victory nonetheless. The game was decided late in the fourth quarter when Joe Pa and his staff decided to go for the victory rather than play for a tie. They were trailing

10-7 and could have gone for the field goal to tie things up, but instead they decided to go for the win.

On that key fourth down inside the Temple five-yard line they put the ball into the hands of Brandon Beachum and he fell forward for the first down.

Earlier in that drive they gave quarterback Rob Bolden the chance to make a play on a third down and a fourth down. He made a couple of clutch throws to keep the drive going. First he converted a third down play with an 11-yard throw to Devon Smith. Later on with the game on the line on a fourth and two, he completed a pass to Derek Moye on an 11-yard slant route.

was the difference in the game.

“The kids hung in there and did some things well,” Joe Paterno said, “but we’ve got a ways to go.”

The Penn State defense kept them in the game, but putting the pressure on Temple quarterback Mike Gerardi and picking him off three times. The lefthander just didn’t have what it takes to make the plays against the Nittany

It seemed that the Penn State coaches came to the understanding late in the first half that all they had to do was stop Temple running back Bernard Pierce and they could beat the Owls. Pierce hurt Penn State early in the game, but they stacked an extra defender in the box against him as the game went on and that proved to be the solution.

It’s a shame the Owls didn’t have a quarterback, neither Gerardi nor his backup Chester Stewart, could make a play through the air to give Pierce some help despite the Nittany Lions being stacked against the run.

The Owls have some talented players on their defensive front. Linebacker Tahir Whitehead has impressive speed and some big time explosiveness. He was all over the place making tackles.

Penn State linebacker Michael Mauti had quite a game for the Nittany Lions. Not only did he make countless tackles, he also made the defensive play of the game when he picked off a Gerardi pass to set up the winning scoring drive.

Although they escaped with a win, the Nittany Lions can’t be thrilled with their performance. They missed a couple of field goals, one of them was a chip shot. They blew scoring opportunities and were inconsistent offensively most of the day.

I don’t think the alternating of the quarterbacks helps Penn State. Both Matt McGloin and Bolden are capable of developing into quality college quarterbacks, but neither will be as good as they can be if they continue to alternate them.