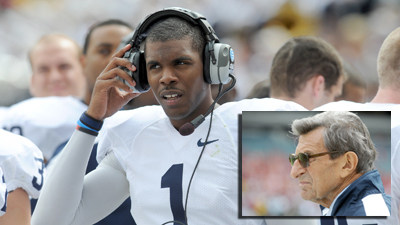 Joe Paterno and the Nittany Lions coaching staff should stop the nonsense and decide on a starting quarterback. They are hurting the football team by refusing to let either Matt McGloin or Rob Bolden take the number one job.

The key in this decision concerns practice time. Right now they’re letting both Bolden and McGloin take the same amounts of reps at practice. If they made a decision to go with one over the other, that quarterback would be get the chance to throw to his receivers much more.

The extra reps is going to allow one of the quarterback to better develop his timing with the receivers. They’re going to get a feel for each other and take the connection to another level. Their passing game isn’t what it should be although they have two quarterbacks who could be better and they have some quality receivers.

Any little kid who have been watching the Nittany Lions games for the last couple of years has decided that one of these quarterbacks is better than the other. It’s not an easy decision because both of them bring something to the table that the other doesn’t but the coaching staff like everybody else must make a decision.

hurt.. It won’t be fun for the guy that becomes the backup but it will be the best decision for the football team.

This squad would start to develop a belief in the top guy and the personality of the team would be develop and built around the starting quarterback. This would make this Nittany Lions team a better football team.

In quite a few games, it takes time for the quarterback to establish his rhythm. How can you do that if you only get to play a series or two then you head back to the bench?

This team needs to throw the ball more effectively if they’re going to have any success this year.
I could understand the argument that McGloin should be the starter. He seems to be ahead of Bolden in his feel for this passing game out of the pocket.

On the other hand, Bolden is the better athlete of the two, and he gives them the ability to run with the football. There are certain plays that Bolden could run which would give him options to run or pass and put the defense in a no win situation.

I could understand them going either way, but Joe Pa and his staff should make a decision if they want this team to be as good as it can be.