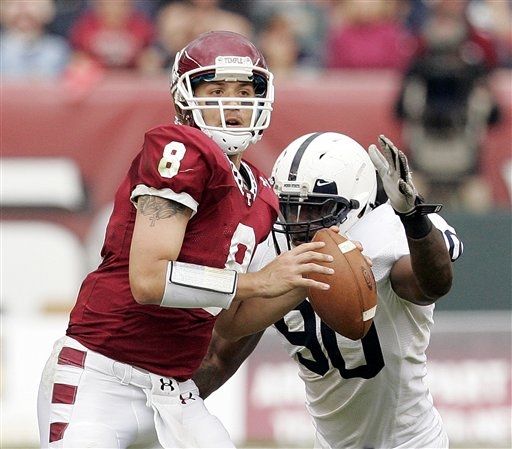 You can’t get a moral victory from losing to a team that you could have beaten. The Owls, who led the game for more than three quarters had every opportunity to put the game away, but they just couldn’t do it.

“There’s no moral victories”, said Temple head coach Steve Addazio. “There’s nothing. . . . We lost. We could play anybody for that.”

From a talent standpoint, the Temple Owls are on the same level of the Penn State Nittany Lions except they’ve got to get better play from the quarterback position. Tahir Whitehead and that Owls defensive front is just as good as the Nittany Lions. Add a decent passing attack to their running game led by All-American running back Bernard Pierce and you have yourself a team that could have beaten the Nittany Lions.

Pierce is a future NFL player with great size and speed. I love his vision and ability to press the hole, then take the run outside if the opening isn’t there.

He made some big runs early in the game, but Penn State focused on him more the rest of the way and the Owls couldn’t get the job done through the air. Pierce finished the game with 50 yards gained on the ground in 17 carries.

You should be able to throw the football against team that brings eight guys into the box to stop the running game.

playing more conservative and making sure the Nittany Lions had to march the length of the field to beat them.

Gerardi threw two interceptions and they were two awful ones, as he telegraphed both passes and threw the ball behind his target each time. The second pick set up the Nittany Lions winning scoring drive.

“They were bad throws,” Gerardi said afterward. “I saw the guy was open. I didn’t lead him enough.”

He completed 9 of 22 passes for 95 yards with two interceptions. That’s just not good enough to beat a good football team.

So Far Today, Quite A Few Surprises In The NFL