The Eagles Loss To Atlanta, Makes Us Thankful We Have The Phillies 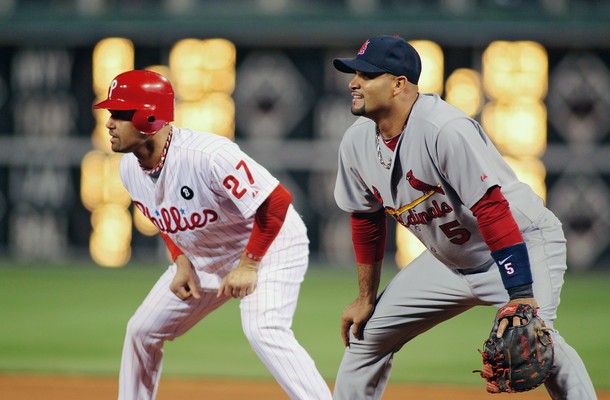 Last night, the Eagles reminded Philadelphia sports fans, how lucky we are to have the Phillies. Between April and the present day I have watched the Phillies, and not once did my blood boil, not once did I scream at my TV or punch a pillow, an excellent Saturday in Philly sports was not enough to calm me during last night’s Eagles game.

“CHALLENGE THE INTERCEPTION! WHAT THE (EXPLETIVE) ARE YOU DOING? THE SCREEN DID NOT WORK ON SECOND DOWN, WHY ARE YOU DOING IT ON THIRD!” “I AM DONE WITH THIS TEAM!”

It was only one early season Eagles game, yet there I was a typical angry Philadelphia sports fan. The question I ask myself is should I get worked up over the Eagles this early? Should I be thankful for the decade of winning from Andy Reid instead of despising him and give him a pass?

As much as I want to appreciate what Andy Reid has accomplished over the past decade, I can’t because he hasn’t led my beloved Eagled to a Super Bowl title. Year after year it is the same exact storyline with the Eagles, talented team poor clock management, missed used challenges, and poor late game play calling with no explanation as to why after the game.

Even with some of the most exciting players in the history of the team, the Eagles are somehow boring. I know I shouldn’t compare the Eagles and Phillies and in reality they are apples and oranges, but I can’t help it. Watching the Phillies dominate baseball the way they have this season showed me as a fan what a true dominate dream team does in a sport. It seems every time the Phillies are presented with a challenge they exceed our expectations as a fan whether it is going 9-1 on a West Coast road trip or taking 6 of 7 from the two top teams in the National League, not named the Phillies. Those factors combined with a recent championship win make it impossible to get easily angered by one or two bad Phillies games.

The Eagles have the exact opposite dynamic from the Phillies. They are becoming boring because they are the same story every year, they remind me of the TV show Entourage, an awesome show back in 2004, but by 2011 it is the same story every season and it is time to cancel the show and begin something new.

Maybe like Entourage 2011 should be the final season for the Andy Reid in Philadelphia story. The Tampa Bay Buccaneers, had a talented team back in the late 90’s and early 2000’s, they had a really good coach too in Tony Dungy, but Dungy’s Bucs became a broken record consistently making the playoffs and losing. The Bucs fired Dungy, brought in Jon Gruden and won the Super Bowl the very next season. Dungy was a good coach, he ultimately won a Super Bowl, Dungy just wasn’t the right coach for that Bucs team. Maybe that is what is going on with Andy Reid. Maybe the national guys are right; Andy Reid could win a Super Bowl as a coach, but not in Philadelphia.

Andy Reid has been close to winning since 2001, yet ten years later he has yet to do it. This weekend was the perfect example of why the Eagles are becoming the same song on loop. The Temple Owls have been able to build a football program capable of competing with Penn State, and the Phillies turned a team that played in front of an empty stadium into a team that has sold out 200 straight regular season games in route to its 5th straight NL East crown. These events in Philadelphia sports have all occurred since Andy Reid appeared in his first NFC Championship game.

Am I over re acting after ONE Eagles loss? Definitely, but after 10 plus seasons of the exact same coaching mistakes it becomes very frustrating to watch as a fan. Andy Reid killed the buzz on what should have been on awesome weekend in Philadelphia sports.

Since I have seen this story of the Eagles before, I know they will put a nice run together after this Atlanta Falcons loss and be a favorite to win the NFC come playoff time, but the story will end with a playoff loss that includes all the mistakes the fans witnessed in last night’s loss to the Falcons.