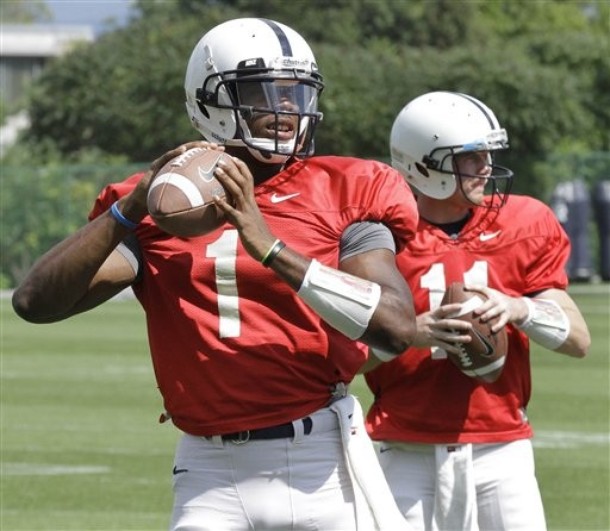 Three weeks into the season and Penn State is one of six teams who have yet to record a passing touchdown. The other five teams, aside from Oregon State, are from mid-major conferences.

That notion doesn’t bode well for the current season, let alone for the future of this program.

For decades, Penn State has been known for their defense, specifically their linebackers. There’s also been a handful of talented running backs to climb the ranks at Penn State. As for the quarterbacks, well, that’s been a different story.

In recent memory, Penn State has had some sub-par field generals; names such as Anthony Morrelli, Daryl Clark and Zack Mills don’t necessarily roll of the tongue easily when discussing some of the best collegiate quarterbacks in the past decade. The current identity of this team, aside from their defense, is still a work in progress.

Both Rob Bolden and Matt McGloin have struggled this season, with none of them playing their way into the starting gig. With zero touchdowns between the two and a 106th ranked passing offense, Penn State is in for a very challenging conference schedule against some of the top quarterbacks in the nation: Denard Robinson, Taylor Martinez, Kirk Cousins and Dan Persa.

But what might be the most difficult upcoming procedure will be the following offseason as the coaching staff tries to determine just who exactly deserves to be the starter heading into the 2012 season. Bolden and McGloin will both be back, unless Bolden actually goes through with his transfer as he threatened he would this past offseason, and redshirt sophomore Paul Jones will be available for competition, as well, barring another academic issue. In other words, there will be (once again) options at the quarterback position next season.

“Penn State already has a commitment in this recruiting class from a name very familiar to those of us who love Philly sports — Skyler Mornhinweg, son of Marty. However, given the current convoluted situation, Penn State may still look to add one more quarterback recruit if the right candidate comes along,” said Chris Grovich of Black Shoe Diaries. “They’re still trying to get New Jersey athlete Devin Fuller to Happy Valley, and have promised him a shot at quarterback if he attends Penn State.”

But there’s no guarantee that Mornhinweg or Fuller will be the future of this team, and there’s honestly no promise that these two players are completely sold on Penn State. The recruiting process could take a hit if this quarterback situation continues to drag on. Any high school quarterback who is being recruited by Penn State has to take into consideration the current state under center. It may seem like a minor hiccup, but the poor handling of this situation and the juggling of the quarterbacks back-and-forth could wind up playing a factor in the decision-making process for an incoming quarterback.

“Players want to know that the coaching staff knows how to handle their players and put them in a confident position to succeed. So far, it would be difficult to make that argument as far as Penn State’s coaching staff is concerned and I am sure potential recruits are taking notice,” said Kevin McGuire of the National College Football Examiner. “I am not sure exactly how that may affect the current recruiting class though; that remains to be seen.”

Reid Admits Mistake On Vick Fumble Before The Half

The Eagles Loss To Atlanta, Makes Us Thankful We Have The Phillies